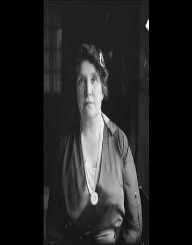 Nellie Melba was a famous opera singer.  The soprano from Australia was known for her singing as well as her presence on the stage.

Nellie Melba was born in Richmond, Victoria, Australia.  Her name at birth was Helen Porter Mitchell.  Her father David was a builder.  Her mother's name was Isabella.  Nellie Melba was the oldest child who survived in her family.  Melba started her musical training early in her childhood.

Nellie Melba studied piano and singing.  When she was six years old, she gave her first public performance.  She continued to perform during her early years.  As a teenager, she served as a church organist as well as performed in concerts.

Her mother died when Nellie Melba was 20.  While her father was encouraging when it came to her love of music, he did not approve of her music as a career path.  The family moved to Mackay, Queensland for her father's job where he had to build a sugar mill.

Nellie Melba did not start her singing career professionally until 1884.  Her concerts were organized with the help of her friend John Lemmon.  She found great success in Melbourne.  In 1886, she debuted in London at the Princes' Hall.

However, it was not well received.  When Nellie Melba went to Paris for training, she worked with Mathilde Marchesi.  After a year, she was assigned a ten-year contract with Maurice Strakosch. She was offered a better deal with the Brussels-based Théâtre de la Monnaie, but she had to honor her commitment.  However, when Strakosch died, she was no longer bound to her contract.

In 1887, Nellie Melba started using her stage name, Melba.  Her debut at Théâtre de la Monnaie was in October performing as Gilda in “Rigoletto”  She also portrayed Violetta in “La Traviata.”

Nellie Melba went back to London to perform at Covent Garden.  Her 1888 debut was the title role of “Lucia di Lammermoor.”  She still did not receive the same kind of recognition as she did in France.  She returned to Paris to perform as Ophélie in “Hamlet” at the Opéra.

Nellie Melba did make an impression in London, however.  Lady de Grey was a fan and wanted her back at the Covent Garden.  Melba returned to perform in “Roméo et Juliette.”  In the following years, Melba performed in Paris and London as well as other top European opera houses in Milan, Vienna, and Berlin.

Nellie Melba traveled across the Atlantic to New York to make her first appearance at the Metropolitan Opera.  She portrayed Lucia di Lammermoor, but that did not gain as much praise as her performance in “Roméo et Juliette.” Nellie Melba toured the world and gave concerts in many countries until the last few years of her life.

When Nellie Melba would return to Australia, Melba would be a singing teacher at the Melba Conservatorium of Music in Richmond which she opened.  She wrote method books as well as her memoirs. Nellie Melba also toured her native country, bringing opera beyond the major cities.  She built a home for herself outside of Melbourne in Coldstream.  She continued making appearances and giving concerts long after she retired from the stages where she got her international start including Covent Garden.  Her last concert was a charity event in London.

Nellie Melba married Charles Armstrong.  The couple had a son, but she left her husband shortly after that.  In the months after their son, George was born, she moved to find her career in opera outside of her home in Queensland. Armstrong divorced Melba in 1900 after she had an affair.  While visiting Egypt in 1930, she developed a fever.  Nellie Melba died on February 23, 1931, in Sydney, Australia at the age of 69.

Nellie Melba took on the stage name of Nellie Melba as a nod to her hometown of Melbourne.  She was the first opera singer from Australia to become a success on an international level.  Even though she was not strong in French pronunciation, she was still in demand for her singing abilities. There are some recordings of her singing and her speeches from her concerts, however, on the later versions in the 1920s had a better sound quality.  Today food items including Melba toast and Peach Melba are named after her.  She is commemorated in some ways including a bust on the grand staircase in the Royal Opera House at Covent Garden.

During World War I, Nellie Melba performed at benefit concerts.  Overall she raised £100,000.  She was recognized for her patriotic work in the country.

•    Melodies and Memories autobiography along with Beverley Nichols, 1925