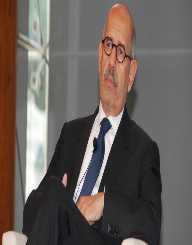 Mohamed Mustafa ElBaradei was born on June 17, 1942, in Cairo, Egypt. His father was an attorney, who headed the Egyptian Bar Association and supported the democratic rights in Egypt. He is a native speaker of Arabic and is also fluent in English, French and conversational in German.

ElBaradei graduated the University of Cairo in 1962, earning Bachelor’s degree in law. He later went to study at the Graduate Institute of International Studies in Geneva, earning master’s degree in international law and later earned a J.S.D. in International Law at the New York University School of Law in 1874. ElBaradei is married to Aida El-Kachef, a teacher. They have two children, Laila, a lawyer working in London, and a son Mostafa, IT manager in Cairo.

ElBaradei began his diplomatic career in 1964 when he served at the Ministry of External Affairs in the Permanent Missions of Egypt to the United Nations in New York and Geneva. He was in charge of the legal, political and arms-control issues. In 1980, ElBaradei became the senior fellow of the International Law Program at United Nations Institute for Training and Research.

From 1981 to 1987, ElBaradei was an adjunct professor of international law at the New York University School of Law. ElBaradei continued the rise of his career by becoming the senior staff member of IAEA Secretariat and served as the agency’s legal adviser and Assistant Director for External Relations.

ElBaradei became the Director General of the International Atomic Energy Agency in 1997 and was re-elected for two more four-year terms. During his first term, ElBaradei established comprehensive safeguard agreements with the newly adopted Additional Protocol. The purpose of it was to achieve global adherence, and by 2009, 93 countries had Additional Protocols in force. His first term ended in November 2001, just two months after 9/11 terrorist attacks. After this, ElBaradei established a nuclear security program to combat the risk of nuclear terrorism.

During his second term, the major issues of the IAEA was the agency’s inspections in Iraq. In 2003, he told the UN Security Council that documents that showed Iraq tried to acquire uranium from Niger were not authentic. The United States opposed his election for the third term. However, he was elected. It was reported that the Bush administration had intercepted ElBaradei’s phone calls with Iranian diplomats and used this information to force him out. The U.S. was the only country to oppose his election and ElBaradei won the election. His work has been praised and recognized in the international community. In 2008, he announced that he would not be seeking a fourth term election.

ElBaradei has voiced his idea for the future of the nuclear fuel cycle. He wanted to limit the processing of weapon-usable material in civilian nuclear programs and outlined the advantages of international co-operation in the nuclear-fuel cycle. He also sponsored a comprehensive global initiative- the Programme of Action for Cancer Therapy to fight cancer. ElBaradei also served on the Board of Trustees of the International Crisis Group.

In 2005, ElBaradei and IAEA were announced as recipients of the Nobel Peace Prize for “efforts to prevent nuclear energy from being used for military purposes and to ensure that nuclear energy, for peaceful purposes, is used in the safest possible way.”

ElBaradei had been following the politics of Egypt, and in 2011 returned when the largest protest in 30 years was taking place. He declared that he is ready to lead the transitional government upon the will of the nation. Some political movements called ElBaradei to form a transitional government after he joined the opposition of the Mubarak regime. In 2010, ElBaradei met with several opposition leaders, which led to the forming of non-party-political movement the National Association for Change. The movement aimed for reforms in the political scene, mainly for the restrictions of presidential elections. In 2011, it was announced that ElBaradei intends to run for the presidential election.

In April 2012, ElBaradei launched the Constitution Party, but he was too late to run for the presidency. He became a prominent figure in the Egyptian opposition and formed the National Salvation Front, opposing the decrees of President Mohamed Morsi. He was involved in the coup d’etat which toppled the elected president Mohamed Morsi. ElBaradei was present when Morsi was removed from power. Following Morsi’s ejection from the presidency, ElBaradei was mentioned as the candidate for the interim prime minister. He denied interest in the position at first but later retracted his objections. He was sworn in as Vice President, responsible for international relations in 2013. However, after violent attacks by security forces on supporters of Mohamed Morsi, which killed 525 people, ElBaradei resigned his position.