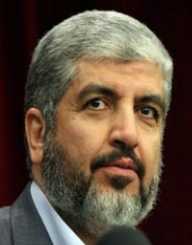 Khaled Mashal was born in 1956 in Silwad, Ramallah. He moved with his family to Kuwait when young and lived there until 1990.

Khaled Mashal attended Kuwait University where he was a student leader of the Islamist Palestinians challenging Yasser Arafat, the leader of the Palestine Liberation Organization. He graduated with a B.Sc. in physics.

After graduation, Khaled Mashal taught physics at various schools in Kuwait. Then after the Kuwait invasion, he moved his family to Jordan. In Jordan, he became one of the founders of Hamas and has been the chairman of the Hamas Political Bureau since 1996.

An attempt was made on his life on the 25 September 1997 when Israeli Mossad agents attempted to poison him. The agents were arrested. An Israeli-Jordan stand-off occurred when King Hussein demanded that Israel send an antidote to the poison. Israel sent the remedy and the agents involved were released. The deal included the release of Sheikh Ahmed Yassin from jail in Israel. Jordon subsequently expelled Mashal, and he moved to Qatar, then settled in Damascus, Syria.

During 2004 Sheikh Ahmed Yassin, the Hamas leader, was killed by Israeli air strikes on the 22 March. Dr. Abdel Aziz Rantisi was named as his successor on the 23 March, but on the 17 April of the same year, he too was killed by an Israeli airstrike. Mashal subsequently became the leader of Hamas, along with Ismail Haniya.

In January 2006 Hamas took part in the Palestinian parliamentary elections and won 76 seats, giving them a majority in the 132-seat Palestinian Legislative Council.

On the 14th June 2007, Hamas gained control of Gaza. Mashal met with ex-US president Jimmy Carter in Syria in April 2008. In December of the same year, Israel began Operation Cast Lead using airstrikes to target Hamas. The reason for the airstrikes was the rocket attacks against Southern Israel. From the 2 January 2009 until the 18th January 2009, a ground offensive took place with a cease-fire being declared on the 18th. The following month, Mashal met with Iranian leaders. In May 2011 Mashal signed a reconciliation agreement uniting Hamas and Fatah. During the civil war in Syria, Hamas sided with the Syrian opposition to President Bashar al-Assad.

During 2012 Mashal visited Jordan for the first time since his expulsion in 1999 and met with the king. In February 2012, he moved to Qatar. Later that year, he visited Gaza, his first visit since leaving the West Bank in 1967. Mashal was re-elected chairman of Hamas in 2013.