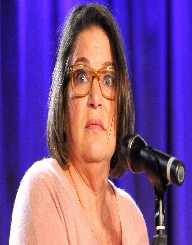 Famous for playing the role of Natalie Green on the show The Facts of Life, Mindy Cohn is an Emmy nominated actress. She is also the voice behind Velma Dinkley in the TV show Scooby Doo.

Melinda Heather Cohn known as “Mindy Cohn” was born on May 20, 1966, in Los Angeles, California. She attended the Loyola Marymount University for a degree in Anthropology. Interested in acting from an early age, she also took acting classes and did some theatre work. Her acting talents were discovered early when a team of producers from Facts of Life visited her school.

Mindy Cohn was discovered by actress Charlotte Rae at 13 years of age when she was studying in her school in North Hollywood. She was signed up for the role of Natalie Green on Facts of Life. She continued to play this role from 1979 until the show’s end in 1988. Her performance also earned her three young artist award nominations.

Despite her talents, Mindy Cohn didn’t have a lot of success in her acting career after Facts of life. She made guest appearances on the shows like Dream On, Suddenly Susan and more. She was also cast in the 1986 film The Boy who could fly to play the role of Geneva. Other TV appearances include shows like Charles in Charge and 21 Jump Street.

But Mindy Cohn didn’t land any significant roles and had moderate success in her other appearances. None of these appearances did enough to launch her with momentum.

Progress as a Voiceover Artist

Mindy Cohn's fortunes turned when she began doing voiceovers for cartoons and animated films. She gave her voice in popular series like Dexter’s Laboratory and Kim Possible.

This established Mindy Cohn as a well-known figure in the voiceover industry and gave her career the momentum she needed. Her most notable performance came with the series Scooby-Doo, in which she voiced Velma Dinkley.

Mindy Cohn appeared as the female lead in the film Violet Tendencies in the year 2010. She made an appearance on season 8 of the series What Not to Wear. She has also made one episode appearances in several TV shows including Hot in Cleveland, Secret Life of the American Teenager, and The Middle.

Mindy Cohn received 3 Young Artist award nominations for her role as Natalie Green in Facts of Life. She was also nominated for the Daytime Emmy Award for What’s new, Scooby Doo?

Mindy Cohn is one of the founders of the weSpark cancer support center.

Mindy Cohn has never married and has no children. She is a supporter of the LGBT community and believes that people have a right to choose when it comes to their life partner. She currently lives in Beverly Hills.