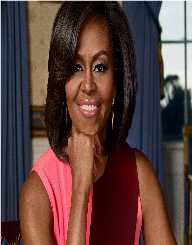 Michelle Obama was key to his campaigns and also played significant roles during her tenure as the first lady. Most of these positions were regarding women empowerment, national service, education and health among others.

Michelle LaVaughn Robinson Obama was born on January 17, 1964, in Chicago, Illinois.Michelle 's parents were Fraser Robinson III and Marian shield Robinson. Fraser worked as a Democratic precinct captain and also with a city water plant. Her grandparents are believed to have multiracial ancestry. Michelle was brought up in Chicago’s south shore community region, where she enjoyed a conventional and happy upbringing. Robinson also received her elementary education close by, on a school down the street.Michelle's  family attended church regularly at a nearby Methodist church and often went for vacations.

While growing up, she and Michelle Obama's brother skipped the second grade. At sixth grade, Michelle enrolled at the current Bouchet Academy for a gifted class and later joined Whitney Young high school for her high school studies. At this time, Michelle is said to have had gender discrimination and self –fear of how others perceive her but often used it as motivation to keep her going.

At this time, Robinson served on the student council as their treasurer and was part of the National Honor Society. Robinson completed her high school education in 1981 and was a salutatorian of her class.

Michelle Obama later joined Princeton University to pursue studies in Sociology and African American Studies. Entering the university was overwhelming and inspirational to her. While there, this was the first time Michelle became fully aware of her ethnicity and race and claims to have felt like a visitor on campus. During her time there, Michelle Obama associated with `Third world center’ which was a cultural and academic group that was concerned with support for minority students.

As part of her graduation in Princeton, Michelle Obama came up with thesis `Princeton-Educated Blacks and the black community.’ It involved evaluating the experience of African American graduates regarding their education and race.Michelle graduated in 1985 with a Bachelor of Arts degree.

In 1988, Michelle Obama joined Harvard Law School to pursue a Juries doctor degree. While there, Michelle was a worker for Harvard Legal Aid Bureau. Here, she helped individuals with low income to solve their tenant cases.

After law school, Michelle Obama worked as an associate at a law firm called Sidney Austin in Chicago, whereby her job was explicitly on marketing and intellectual property. In the year 1991, her career in the public sector kicked off when Michelle started working as an assistant mayor and assistant commissioner of planning and development at the Chicago city government.

Later, Michelle Obama worked as an Executive director for `Public Allies’ in Chicago. This was a nonprofit organization, and Michelle worked here for about four years from 1993. During her time there, Robinson helped achieve fundraising success for the group, setting records that held up for close to 12 years.

In 1996, Michelle Obama took up a job at University of Chicago as the Associate Dean. While there, she was in charge of student services and helped develop a community service center for the university. Later, Michelle moved to the hospital sector of the University. Here, Robinson worked as an executive director, community affairs in 2002 and Vice president, community and external affairs in the year 2005. She maintained her job but later took a leave of absence to help her husband in her elections and to spend more time with her daughters.

Barrack Obama had expressed his interest in the presidential candidacy in 2007. This led to Michelle cutting off a lot of her professional responsibilities and work, as she wanted to support her husband campaigns on a full-time basis. Michelle Obama was not actively involved initially, but in 2008, she highly participated later on and could even write speeches for Barracks.

Barrack Obama was elected president and assumed office in 2009, with Michelle Obama the first lady. As the first lady, Michelle supported the national service, advocated for initiatives that helped career women balance their work and personal family life and also supported families with military personnel.

In 2010, Michelle Obama launched an initiative called `Let’s move.’ Its objective was to deal with the problem of childhood obesity and advocating for healthier foods in schools and more physical exercise. Michelle launched another initiative in 2011, called `Joining forces’ which aimed at gaining support for service veterans, families and their members from all Americans.

More so, Michelle Obama launched `Reach higher ‘initiative in 2014 which aimed at motivating the young people to pursue higher education, by completing a university degree or other professional training.

While working at a law firm in Chicago, Michelle Robinson met Barrack Obama who worked as an intern at the company. Michelle Obama was responsible for him as his adviser at the business, and their relationship kicked off. Their love blossomed, and they got married in 1992, whereby they have two daughters together, Malia and Natasha. Michelle loves her family and often considers them as a priority, and many regard her as a very committed mother.