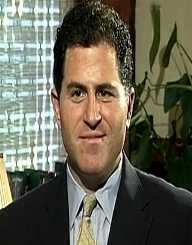 It is not easy to operate a company that has a wide array of branches all over the world. But Michael S. Dell proved us wrong. Acting as the founder of a multinational Information Technology Company, he is a known and respected fellow. Probably you might be using his modern PC or ultraportable device “Dell.” I bet they are up to the standard. When it comes to sales of personal computers, Michael is an up-skill entrepreneur. He has acted as the foreman of the organization for over a decade.

Hailed as one of the well-to-do men in the world, Michael S. Dell speaks of billions and not nickels. I guess his father instilled entrepreneurship in him since he served as an investor. Both of his parents discussed end deals in front of him. This is what paved the way for his intelligence and creativity.

At his tender age, business skills started to gain valuable space in his future. Before fame, Michael took odd jobs, and in the process, he began to invest his earnings. It was his innate relation with technology that he managed to buy his first laptop at 15 years of age. Without further ado, he dissembled it with extreme curiosity on his side. I don’t know whether he managed to build a profitable business out of it.

On 23rd February 1965, a duo called Alexander Dell and Lorraine Charlotte were blessed with their second born child in Houston. He was none other than Michael Dell whose father served as an orthodontist while his mother worked as a stockbroker. At his tender age, he was taken to Herod Elementary School that was located in Houston.

Growing up as an intelligent boy, he learnt all about financial affairs, all thanks to his mother. Above anything else, Michael loved to earn his own money. In the process, he landed a position as a stamp collector where he made $2000. It was here that he opted to invest his earnings in precious metals as well as stocks.

At 15 years of age, Michael S. Dell came to love technology when he bought his first computer. No, he didn’t want it for research, but he wanted to study its components. While at Memorial High School Dell kept himself busy where he sold subscriptions. At his tender age, Michael dreamt of becoming a proper entrepreneur, but both of his parents wanted him to be a promising physician.

In 1983 he joined the University of Texas, Austin. As an intelligent lad, Michael didn’t give up on his entrepreneurial skills. In fact, he established a small business where he managed to sell computer accessories. His business fathomed well, where he opted to drop out of school to give his plans the end motives.

In January 1984 Michael S. Dell established his own company called PC’s Limited. In the mid of the same year, he named his company like Dell Computer Corporation. By then his business grew to the point of employing a few assistants. He also managed to get new orders from various institutions.

Michael concentrated more on the value on his end rather than the profit that he made. Out of his way, he made quality products. After some time, the company gave birth to other branches. Before the end of 1985 Dell Company started to design their computers.

It was in 1986 that Dell came up with a 286 processor and 12 megahertz computers. They were considered as the first products in the market at that time. It was here that he started to compete with other stakeholders such as IBM. Positive reviews followed him like a river. By 1992 the company’s profit increased by 90%. It was here that his company was named as the top leading organization globally by Fortune Magazine. At only 27, he acted as the CEO of one of the most notable companies in the world.

In the mid of 1990s, Michael S. Dell realized the importance of communication where he established his web called www.dell.com. It was here that he started to sell his products online where he made massive sales.

In the mid of 1998, Dell established the MSD Capital L.P where he welcomed people to invest such as real estates and private equities. It was in 2004 that Michael S. Dell opted to step down as the acting CEO of his own company. But he remains as the chairman. Later on, he was reinstated as the CEO in 2007.

Michael S. Dell will forever be recalled as the founding father of Dell Inc. The company is considered as the most vital technology organization in the world. To date, he has employed over 200,000 people internationally. According to sources, Dell is currently viewed as the number one distributor of PCs globally.

From 1993 to 2001 Michael’s brilliance was recognized by several institutes. As a result, he was honored with many awards including being named as the CEO of the Year by Financial World, Chief Executive among others. When it comes to his personal life, Dell tied a nuptial knot with Susan Lynn Lieberman with whom he has four children.

In partnership with his wife, Michael S. Dell launched the Michael and Susan Dell Foundation before the new millennium. It is an organization that focused on childhood health, urban education and so on.