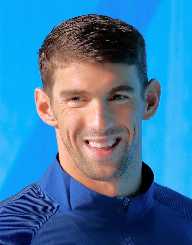 Michael Fred Phelps II was born on June 30, 1985, in Baltimore, Maryland. He received his education from Rodgers Forge Elementary, Dumbarton Middle School and later went to Towson High School. He is the youngest of three children to his mother Deborah, a middle school principal and his father, a retired Maryland State Trooper. His parents divorced in 1994, but his father eventually remarried in 2000.

His two older sisters were both swimmers. When Phelps was seven years old, his mother sent him together with them to learn how to swim. She thought the activity would be a great outlet for his energy. In the sixth grade, he was diagnosed with attention deficit hyperactivity disorder, and swimming helped him to balance his energy. At ten years old, Phelps held the national record in his age group for 100-meter butterfly and began training with North Baltimore Aquatic Club.

When Phelps began training with a professional coach, he improved rapidly and in 2000, qualified for the 2000 Summer Olympics. At 15 years of age, he became the youngest male to make the U.S. swim team in 68 years. At the Olympics, he reached finals and came in 5th in the 200-meter butterfly. However, the following year at the World Championships, Phelps broke the world record in the 200-meter butterfly. In 2002 Pan Pacific Swimming Championships, Phelps set the American record for the 200-m medley and improved the world record in the 400-m medley. In Japan, Phelps won three gold and two silver medals. Phelps continued his success in 2003 World Championships, becoming the first American to win three different races at a national championships-200- m freestyle, 200-m backstroke, and 100-m butterfly.

Phelps qualified for six events at the 2004 U.S. Olympic Team Trials. In Athens, his first event was the 400-m medley, which he won and set a new world record. The following day he and his team placed third in the 4x100 m freestyle. The following day, Phelps finished third in the 200-m freestyle. He broke the Olympic record of 200-m butterfly and placed first in the 4x200 m freestyle relay the same day. In the end, Phelps won two bronze and six gold medals, which became the second-best performance ever at a single Olympics.

At the 2008 Beijing Olympics, Phelps started out with setting an Olympic record in the 400-m medley in preliminaries and won the gold medal, breaking his record for 2 seconds. He then went on to swim the 4x100 meter freestyle relay and won his second gold. His third race was the 200-m freestyle, and Phelps won the gold medal, setting his third world record. He won the 200-m butterfly race the following day and swam the 4x200 m freestyle the same day. With his teammates, he won the fifth gold medal. He then went on to win the 200-m medley, 100-m butterfly and 4x100 medley relay, winning a total of eight gold medals at the Olympics, which became a record.

In the 2012 Summer Olympic trials, Phelps qualified for eight individual events. In London Olympic games, Phelps won 4 gold and two silver medals, becoming the most successful swimmer of the meet for the third time in a row. The International Swimming Federation honored Phelps as the most decorated Olympian ever. However, after the Olympics, Phelps announced his retirement.

In 2014, Phelps announced he is coming out from his retirement and competed in the 100-m butterfly event in Charlotte, North Carolina. It was reported that he was motivated by the national team’s failure to win 4x100 m freestyle relay since Beijing 2008. He changed his training program, scaling back on calorie intake and increasing post-swim ice baths. Phelps was dropped from the 2015 World Aquatics Championships for driving under the influence of alcohol. Instead, he competed in the US National Championships and won gold medals in three events.

Phelps’ body features have been attributed to his major success- long thin torso, arm span of 201 cm, and height of 193cm, as well as hypermobile ankles with 14-size feet. During the 2008 Olympics in Beijing, his performance was questioned, and it was rumored that he might be taking performance-enhancing drugs. However, he passed all nine tests administered to him.

Phelps is married to Nicole Johnson, a former Miss California USA. The couple secretly married in 2016. Their son Boomer Robert was born on May 5, 2016. As a child, he idolized the Australian swimmer Ian Thorpe. In 2008, Thorpe initially stated that it is not likely Phelps will win all eight medals, but, after being proven wrong, he congratulated him and his mother.

In 2004, Phelps was arrested for a DUI in Salisbury, Maryland, when he was just 19 years old. He pleaded guilty and received 18-months probation and $250 fine. In 2009, a photo of Phelps using a bong appeared, which made him lose Kellogg Company as a sponsor and a three-month suspension by US Swimming. In 2014, he was again arrested for DUI and speeding in Baltimore, Maryland. For this, he was suspended for six months from USA Swimming.

Phelps is the hear of Michael Phelps Foundation, and after the 2008 Olympics, he donated $1 million to the charity. The foundation focuses on promoting a healthy lifestyle and growing the sport of swimming. In 2010, the foundation developed the “im” program for Boys & Girls Club members, teaching the importance of being active and healthy. Michael Phelps Foundation’s largest event is the Golf Classic for raising funds.