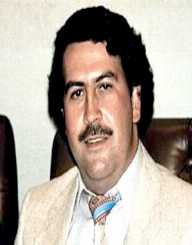 Pablo Emilio Escobar Gaviria was born in Rionegro, Colombia on the 1 December 1949. Escobar grew up in the suburb of Envigado. His father was a farmer and his mother a schoolteacher. He was an ambitious young man and often talked of becoming president of Columbia one day.

Pablo Escobar enrolled and studied at the Universidad Autónoma Latinoamericana of Medellin but did not graduate.

As a young man, Pablo Escobar was involved in what became known as the Marlboro Wars, a venture involving the smuggling of cigarettes into Columbia. He was also involved in car stealing. Then in the 1970s, he became active in the drug trade, particularly in dealing with the supply and demand of cocaine into the United States. He was a member of the Medellin Cartel.

By 1975, Pablo Escobar controlled the Medellin Cartel. The cartel then started purchasing large of amounts of coca paste which was sourced in Bolivia and Peru. During the 1980s, his cartel controlled over eighty percent of the cocaine moved to the United States. Forbes listed Escobar as one of the ten wealthiest people on the planet.

Escobar had never given up on his youthful ambition to be president of Columbia.

Elected as a member of the Colombian Liberal Party and was elected to the Chamber of Representatives of Colombia in 1982. He later resigned when his criminal activities were revealed.

Colombian politics turned violent after Pablo Escobar left politics. He demanded a no-extradition clause and amnesty to drug barons if the drug trade was to be abandoned. Thousands of people were said to have died including judges, police officers, journalists and a couple of Colombian presidential candidates. The downing of a Columbian aeroplane which killed over a hundred people led to his downfall.

With his incredible wealth, Escobar put some of it back into the community, sponsoring sports groups, charitable organizations, and social programmes. People remembered his generosity, and when he died, many Colombians turned up at his funeral to pay their respects.

Pablo Escobar surrendered in 1991, and the Colombian government agreed not to extradite him. He was housed in a luxury prison of his own making La Catedral and guarded by men of his choice. In 1992, when he learned that the authorities were planning on moving him to a more conventional prison, he escaped. Later, in December 1993, when authorities tracked him down, a shoot-out resulted in Escobar's death.

Pablo Escobar married Maria Victoria Henao in 1976, and the couple had two children, a son, Juan Pablo and a daughter, Manuela.

Juan Pablo wrote a book about his father entitled Pablo Escobar: My Father which was published in 2015.

Roberto Escobar, Pablo Escobar’s brother, stated his intention to sue Netflix over the portrayal of his family in the series Narcos.