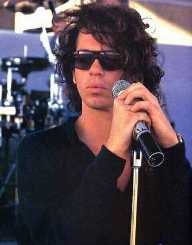 Michael Hutchence was an Australian musician who is best known as the lead singer of INXS.

Due to his unsettled childhood, Michael Hutchence attended some schools. In Hong Kong, he attended Beacon Hill School and the George V School. On his return to Australia, he attended Davidson High School. It was in Davidson that he met the future members of INXS.

Hutchence played music with a group of Sydney friends as a teenager. This team would eventually become INXS.

INXS was initially named The Farriss Brothers, and the line-up consisted of Hutchence on lead vocals, Jon Farriss on drums, Tim Farriss on lead guitar, Andrew Farriss on a keyboard, Garry Beers on bass guitar and Kirk Pengilly on saxophone. The name changed to INXS in 1979.

In 1980 they released their first single, SimpleSimon, and their first album, INXS.They broke the top 40 in the Australian charts with the song Just Keep Walking. The band achieved their early major success with the song, Good Times, it reached number two in Australia and featured on the soundtrack for a film the Lost Boys.

The 1987 album Kick reached number one in Australia, number three in America and number nine in the U.K. In 1992 the band again achieved success with the album Welcome to Wherever You Are reaching number one in the U.K. INXS’ popularity cooled in the 90s and Hutchence died in 1997.

As well as INXS, Michael Hutchence released solo material and acted. His first acting role came in 1986 with the film Dogs in Space. Hutchence played the lead role in the film. Hutchence had been working on a solo album since 1995, and the self-titled album was released in 1999 after his death.

Michael Hutchence had some public romances with Kylie Minogue and Helena Christensen. However, it was his relationship with British presenter Paula Yates that caused the most controversy. Yates was still married to Bob Geldof when she and Hutchence started their romance. Geldof and Yates divorced in 1996, and later that year she gave birth to Hutchence’s daughter. The couple named the child, Heavenly Hiraani Tiger Lily Hutchence.

During the time his affair with Paula Yates became public Hutchence assaulted a photographer. In 1992, Hutchence got into a drunken altercation with a taxi driver and suffered a fractured skull. The damage caused him to lose his sense of smell and taste and caused bouts of aggression. He became violent to his bandmates and on one occasion threatened them with a knife.

While on tour with INXS, Michael Hutchence was found dead in his hotel room with a belt around his neck in an apparent suicide. Hutchence had made some phone calls that day around the ongoing custody case between Geldof and Yates that prevented Yates from leaving the U.K. Both Yates and Geldof were questioned by police following his death.

Michael Hutchence left no suicide note and years later Yates claimed that it was most likely autoerotic asphyxiation gone wrong that killed Hutchence. Hutchence was cremated in Sydney. The U2 song Stuck in a Moment and You Can’t Get Out of It was written about Hutchence’s suicide.