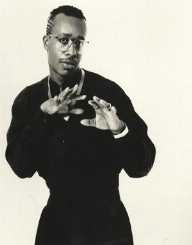 MC Hammer, real name - Stanley Kirk Burrel, was born in Oakland, California on March 30, 1962. His father was a professional poker player and casino manager, but his mother was a secretary. He and his eight siblings grew up poor. The family was a frequent thoroughbred horse race attendants and eventually became owners and winners of several prestigious awards.

Young Burrel used to sell baseballs and dance accompanied by a beatboxer. The Oakland A’s team owner saw him performing and hired him to work as a batboy with the team from 1973 to 1980. During this time, he acquired the nickname M.C. for being a Master of Ceremonies. He performed in various clubs while on tour with the A’s.

MC Hammer graduated from Oakland high school and took undergraduate classes in communication. He was a talented baseball player, which won him a tryout with the San Francisco Giants. Hammer failed to win a place in a professional baseball organization and for a while considered to work in the drug trade. Instead, he joined U.S. Navy for three years.

When MC Hammer left the army with an honorary discharge, he went back to Oakland. He borrowed money from two of the former A’s players and started his record label Bust It Productions. He released his first album Feel My Power in 1987, and Let’s Get It Started in 1988. The albums sold well, and he was later signed with Capitol Records.

In 1990 he released his third album Please Hammer don't Hurt ‘Em. The record sold in more than 10 million copies and became the most successful rap record in history at the time. The album is still No.5 on all-time best-selling rap albums list.

In 1991, MC Hammer released his fourth album. The record was lavishly promoted, but despite all efforts, it did not sell as well as the previous, yet still went double-platinum.

Before Hammer's next album, he signed a multimillion-dollar deal with a new company. He switched to Giant Records and also launched his enterprise Roll With It Entertainment & Sports Management. He also parted ways with his only female executive, who went on to work with artists like The Black Eyed Peas, Eminem and Puff Daddy.

In 1996, Hammer declared bankruptcy. His lavish lifestyle with a $12 million house, more than 17 cars, and around 200 employees exceeded all of his earnings. By the late ‘90’s he got back on feet and was ready to undertake new projects.

From 2005, MC Hammer released seven more albums. None of them reached the level of success as his third album. Nevertheless, MC Hammer often has collaborated with other artists, and his songs have been featured on many TV and film projects. Hammer also has had a significant influence on the rap culture.

After the release of his third album, Hammer’s net worth was estimated to be $33 million. He built his house for $12 million, which later sold for $5 million during his bankruptcy. He currently resides in Tracy, California.

MC Hammer met his wife Stephanie in a church revival meeting. They married on December 21, 1985, and are still married. The couple has five children, and Hammer’s cousin and nephew also live with the family. Hammer often posts about his life and activities on his blog and other social websites.

Currently, Hammer is a consultant for investments and invests in technology projects. He has been involved in with companies such as YouTube, Twitter, and Apple. He also endorsed the SAFE California act, which would have replaced the death penalty,