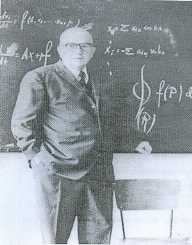 Max Volmer was born 3rd May 1885, in Germany. He was born in the North Rhine region, in a town called Hilden.

Max Volmer enrolled at the Philipps University of Marburg in 1905. He studied chemistry, and in 1908, graduated with his Bachelor Degree. After graduation, he studied at the University of Leipzig, and he achieved his doctorate in 1910. The subject of his thesis was photochemical reaction in high vacuums.

Max Volmer became an assistant lecturer at the University of Leipzig in 1912, and after completion of teaching qualifications, in 1913 he became a teacher there. In 1916, Max Volmer moved to the Physical Chemistry Institute of the Friedrich-Wilhelms University (now called the Humboldt University of Berlin), where he undertook military-related research.

He moved on again in 1918, to a company called Auergesellschaft. The company was headquartered in Berlin and was undertaking research in various compounds and chemistry work. During his two years at the company, Max Volmer had several breakthroughs. He invented the mercury steam ejector, and he also proposed the Volmer isotherm. He also published a paper in conjunction with Otto Stern, the outcome of which was the Stern-Volmer equation and constant.

In 1920, Max Volmer returned to academia. He was appointed Extraordinarius Professor of Physical Chemistry and Electro-Chemistry at the University of Hamburg. In 1922, he was appointed to a similar position at the Berlin-Charlottenburg. During his time there he had further breakthrough discoveries. One was the migration of adsorbed molecules, and this became known as Max Volmer diffusion. This was followed in 1930 with another paper, based on earlier work done by John Butler. The outcome of the paper was to be the Butler-Volmer equation.

There was a group of four leading German chemists, of whichMax Volmer was one, who had made a pact together that if the Russians made contact with any of them, the others would be advised. This was primarily so they could continue their work with as little interruption as possible, and if working for the Russians, they hoped their institutes would not be raided which would mean further loss of equipment and staff. The other advantage, of course, was if they went to work for the Russians, they would not be arrested or prosecuted by the Nazis for what might be seen as past political transgressions.

During World War II, one of the members of the group, Thiessen, arrived at work one day with a leading Soviet chemist, who was also a Major in the Soviet army. The group was taken to work in the Soviet Union.

Another member of the group, Hertz, was put in charge of one of the Russian Institutes, and Volmer was assigned to his department.

In 1946, Max Volmer was moved to the Scientific Research Institute No. 9, based in Moscow. The task of Volmer and his bureau was to work on the production of “heavy water.” “Heavy water,” as opposed to normal “light water,” has a higher concentration of hydrogen isotope deuterium (known as “heavy hydrogen”). This, in turn, gives the water denser mass or different nuclear properties.

The production process was designed, and a facility built in 1948. Max Volmer and his group were then moved to another location, and worked on plutonium extraction from fission products.

1955:   Awarded Outstanding Scientist of the People by the Soviet Union, in recognition of the ten years service he had given the country.