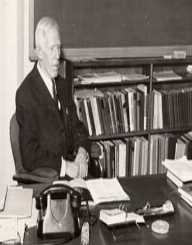 Norwegian physical chemist Odd Hassel was born on Kristiania (modern-day Oslo) on May 17, 1897. His father Ernst August Hassel was a gynecologist. Hassel has a twin brother Lars, two more brothers and a sister. When Hassel was eight years old, his father suddenly died. For this reason, Hassel continued to live with his mother until he was 35 years old.

Odd Hassel attended the Vestheim School and graduated in 1915. Afterward, he enrolled at the University of Oslo, where he studied mathematics, physics, and chemistry as his main subjects. I 1920, he received the Bachelor of Science degree in chemistry. After finishing his bachelor’s degree, Hassel traveled to France and Italy and spent a year studying theoretical physics. However, at the end of the year, he decided to continue studying chemistry.

In 1922, Odd Hassel went to Germany and spent six months in Munich, where he worked for six months under Professor K. Fajans on reactions of organic dyes on silver halides. His work led to the discovery of absorption indicators. After the six months in Munich, Hassel went to Berlin and joined the Kaiser Wilhelm Institute, where he began working on crystallography with the help of X-rays. In 1923, he received the Rockefeller Foundation Fellowship, allowing him to complete his doctorate. In 1924, Hassel received his Ph.D. degree in chemistry from the Humboldt University of Berlin.

In 1925, Odd Hassel became the university stipendiat and later the docent of the chemistry faculty of University of Oslo. In 1934, he was promoted to Professor and the Chairman of the Physical Chemistry department, a post which he held until 1964. During his time at the University of Oslo, Hassel began intensively researching the structure of cyclohexane and its derivates. In 1930, he discovered that the cyclohexane crystal has two forms. He laid the fundamental facts about the Conformational analysis and wrote a book on Crystal chemistry.

In the following years, Odd Hassel introduced two other methods on crystal chemistry that were not before used in Norway. He published the article in the Journal of Chemistry: rock being and metallurgy. His article provoked the authorities, and he was arrested by a group of Norwegian Nazis, for being a member of the Resistance. In 1944, he was sent to the Grini concentration camp but was released at the end of the year. After returning to the institute, he began working on electron-diffraction. He continued to publish articles of his work in a Scandinavian journal and became its editor in 1947. During the 1950s, he focused on the research of the structure of organic halogen compounds and carried out research to determine the structure of them. His experiments led to laying down the basic rules behind the geometry of the compounds.

Odd Hassel was born with albinism. He never married, and there are no accounts of his own life. Hassel died on May 11, 1981.

Throughout his career, he received several awards and honors. In 1946, he was awarded the Fridtjof Nansen Award. In 1964, he received the Goldberg and Waage’s Law od Mass Action Memorial Medal from the Norwegian Chemical Society. His biggest honor was the Nobel Prize in Chemistry in 1969.