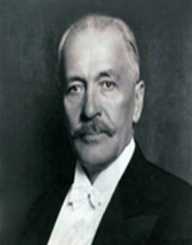 Paul Walden was a Russian and Latvian-German chemist best known for his research in the field of stereochemistry and history of chemistry. Born on July 26, 1863, he is the inventor of the stereochemical reaction also known as Walden inversion. Walden produced the first room-temperature ionic liquid, ethylammonium, nitrate.

Paul Walden was born on July 26, 1863, in Rozula, now Stable parish, Pargauja, a municipality in Latvia. Born into a large peasant family, he lost both parents at age four.  Nonetheless, his two elder brothers supported him through his education. In 1876, he graduated with honours from a district school in Cesis. He continued at the Riga Technical High School where he graduated in 1882. In December that same year, he enrolled at the Riga Technical University, and it was during his time there that he got interested in chemistry. Walden first scientific study based on the assessing the colour of the reaction of nitrous acid and nitric with other reagents and forming the limits of sensitivity of the colour method to detection of nitric acid was published in 1886.

Paul Walden became a member of the Russian Physio-Chemical Society in April 1887, and since then worked with Wilhelm Ostwald, who had great influence in his career as a scientist. In 1887, the two published their first work on the dependence of the electrical conductivity of aqueous solutions of salts on their molecular weight. He graduated from Riga with a degree in chemical engineering in 1888.

Paul Walden worked as an assistant under Professor C. Bischof at the Riga Technical University after his graduation in 1888. In 1894, he published his "Handbook of Stereochemistry," which he compiled under the guidance of Bischof. Walden did several chemical syntheses and characterizations before coming up with the book. These research also led to him writing 57 journal papers on stereochemistry from 1889 to 1900 in Russian and foreign journals. Through his work in the field of physical chemistry, Walden confirmed in 1889, that the ionizing power of non-aqueous solvent and the dielectric constant are directly proportional. He became an assistant professor of physical chemistry at the University in 1892.

In September 1894, Walden became a professor of analytical and physical chemistry at the Riga Technical University after he had received his doctorate a year before. From 1902 to 1905, he was appointed the rector of the University and would remain there until 1911. It was during his time at Riga that he made his best-known discovery, which later became the Walden inversion. He discovered that many stereoisomers can be produced from the same compound through some exchange reactions involving hydrogen. Walden used this for his habilitation thesis, which he defended in at the St Petersburg University in March 1899.

Walden later shifted his interest to electrochemistry of nonaqueous solutions. His first contribution to this field was proposing a theory of auto dissociation of inorganic and organic solvents in 1902. Through further research, he established the connection between the maximum molecular conductivity and viscosity of the medium in 1905 and came up with the term “solvation” in 1906. This discovery and his work in stereochemistry gained him recognition, and he was considered for a Nobel Prize in Chemistry in 1913 and 1914. He was elected as a member of the St. Petersburg Academy of Sciences in May 1910. From 1911 to 1919, Walden was head of the Chemical Laboratories of the St. Petersburg Academy of Sciences. He published 14 articles on electrochemistry and nonaqueous solutions in the "Proceedings of the Academy of Sciences" from 1911 to 1915. Walden synthesis the maiden room-temperature ionic liquid,ethylammonium, nitrate in his article in 1915.

During the World War I, coupled with the political instability in Russia and the October Revolution, affected Walden’s research works and therefore resorted to taking teaching positions. Walden left for Germany in 1915, where he became a professor of inorganic chemistry at the University of Rostock. He worked there until he retired in 1934. He became a foreign member of the Russian Academy of Sciences in 1927, a member of the Swedish Academy of Sciences in 1928 and a member of the Finnish Academy in 1932. His famous book on “History of Chemistry” was published in 1949.

Paul Walden had a daughter, Antonina Anna Walden, who became a music teacher. Walden died in in 1957 at age 93 in Gammertingen.