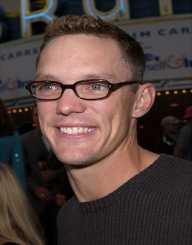 Mathew Lillard is a notable guru when it comes to horror, dance, and theater industry. He rose to fame for portraying as Shaggy in Scooby-Doo films the Mystery Incorporated series. He also made his debut in the movies like Without a Paddle; She’s All that and Arena 57.In the mid of 1990s, Mathew ruled several television shows including SK8 TV. He also appeared in SLC Punk movie in 1998.

Mathew Lillard comes with 6’ 3” height size; he is a taller guy but in a unique way. He also possesses a charming smile that never fades away. The way he dresses and talks describes his setting trends. Mathew likes to thrive on trending news but something different other than usual norms. His charming personality gives him a chance to explore and showcase different talents. For instance, he can play in a sitcom film, horror, drama, and any other genre. All ages love his humor. That explains why he has different friends all over the world. In other words, he knows or comes into contact with lots of people around the globe. Allow me to describe him as a fascinating and captivating man.

Mathew Lillard was first seen in the world on 24th January 1970 in Lansing, Michigan in the United States. He joined American Academy of Dramatic Arts where he became the Nickelodeon SK8 host. In 1991 Mathew went to New York where he joined the Circle in the Square Theatrical School. This is where he landed a small role in the Serial Mom sitcom. Lillard rose to fame in 1996 when he played one of the leading players in Scream film. His overwhelmed performance gave him a chance to up the thespian ladder where he starred in the Wing of Commander film.

Mathew Lillard joined the Scooby Doo world in 2002, and for a decade he ruled the Norville character in Shaggy film. He took Casey Kasem voice who passed away in 2014.Lillard was super proud of having taken the leading role, but also he lost credibility on the way. A talking dog! It took some time for him to realize that he was a middle-aged man but at the same time a thirteen-year-old. Above all, he is still proud that he took part in the Scooby-Doo animation film.

From 2013 to 2015 Mathew smiled all the way, all thanks to his tremendous talent. He received awards like Best Vocal Ensemble for Scooby-Doo Mystery Incorporated film, COFCA Award, Gotham Award, Kid’s Choice Awards in the USA, and Oldenburg Film Festival Award among others. In 2000 Mathew married Heather Helm. The couple was blessed with two daughters Addison Grace and Macey Lyn and a son called Liam. The family lives in Los Angeles. Throughout his career, Mathew founded several theater groups such as Mean Streets Ensemble, Summoners Ensemble as well as Blue Sphere Alliance. Mathew will always be remembered for his one of a kind humor and attractive charm.