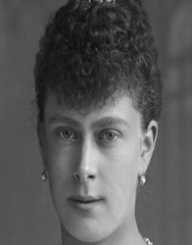 Victoria Mary Augusta Louise Olga Pauline Claudine Agnes was born 26th May 1867, to Prince Francis, Duke of Teck, and Countess Claudine Rhedey von Kis-Rhede. She was born at Kensington Palace in London, England. Mary was the oldest of four children, with three brothers. She was educated at home by a governess and her mother.

King George III was her mother’s grandfather, but her father, without an inheritance or wealth, was quite low on the royal family status list. His title was Serene Highness. The family had a lot of debt and lived overseas from 1883 to try and live more cheaply. In 1885 the family returned to London and moved into White Lodge, located in Richmond Park. Mary was very close to her mother and helped with secretarial duties, as well as assisting in the organization of social events and parties.

In December 1891, Mary became engaged to Prince Albert Victor, Duke of Clarence and Avondale. Albert was Mary’s second cousin once removed, and he was the oldest son of the Prince of Wales. Six weeks later, Albert died from a flu pandemic that swept through the world. Prince George, Duke of York, was second in line to the throne and grew close to Mary after Albert’s death. In May 1893, George proposed to Mary and she accepted.

George and Mary undertook public duties, and in 1897, Mary became the patron of the London Needlework Guild, as a successor from her mother.

Queen Victoria died in January 1901, and George’s father ascended the throne. George and Mary became the Duke and Duchess of Cornwall and York, and they spent eight months of that year touring the British Empire. They visited Australia, New Zealand, Mauritius, Gibraltar, Malta, Egypt, Singapore, Ceylon, South Africa, and Canada. Once they had returned to Britain, George was named Prince of Wales. The family moved to Marlborough House.

In 1904, Mary went to Austria-Hungary and Wurttemberg with her husband, as the Princess of Wales. In 1905, they undertook another eight-month tour, this time of India. As with the previous trip, her children were left in the care of their grandparents. They had hardly been back when they travelled to Spain for a royal wedding.

On 6th May 1910, Edward VII died. George ascended the throne, making Mary, Queen Consort. On 22nd June 1911, Queen Mary was crowned with King George at Westminster Abbey. In December that year, they returned to tour India as the Emperor and Empress of India. The tour lasted two months.

Queen Mary visited returned servicemen in the hospital during World War I, which was emotionally straining for her. Three years into the war against Germany, the Russian Imperial Family tried to seek asylum in Britain but were refused. It is thought this was due to the Tsarina being born in Germany. Just after the war finished, Queen Mary’s youngest child died at only 13 years of age. Mary was heartbroken, but she took comfort in the outpouring of sympathy.

She was a great support to her husband during his reign and was able to give him wise counsel when he had decisions to make, helped him with speeches, and stood firm in the face of civil unrest, Irish independence, and India becoming a nation. King George V became quite ill in the late 1920s, and Queen Mary was devout in her attention to looking after him. In 1935 they celebrated their silver jubilee, and on 20th January 1936, the King died.

After her husband died, Mary’s eldest son ascended the throne and became Edward VIII. This made Mary the Queen Mother. She didn’t use the title and preferred to be known as Her Majesty Queen Mary. Within 12 months of taking the throne, Edward announced he wanted to marry Wallis Simpson, an American mistress who had been divorced twice. Edward received advice from the Prime Minister as well as the Dominion governments (such as Australia, Canada, New Zealand, South Africa, and others) that he could not remain king if he married Simpson. Edward caused chaos to the constitution by abdicating.

Mary couldn’t understand how Edward could give up his royal duties and let his feelings get the better of him. She refused to meet Simpson either publicly or privately, although she continued to support her son. Her second son, Prince Albert, Duke of York, ascended the throne after Edward’s abdication. He took the name George VI.

The new king had two daughters, Elizabeth and Margaret, but neither he nor his wife thought it necessary to have the girls adequately educated. Mary took an interest in this regard and regularly took the girls on excursions to art galleries and museums.

Mary moved to the country during World War II at the request of the king. She continued to keep a public persona, visiting factories, and troops and giving lifts to soldiers when she passed them on the roads. She returned to her house in 1945 after Germany had been defeated.

Mary died on 24th March 1953 in her sleep. She is buried next to her husband at Windsor Castle.