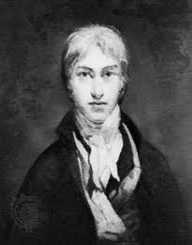 Joseph Mallord William Turner was born 23rd April 1775 to William and Mary Turner. He was born in Covent Garden, London, in England. His father was a barber as well as a wig maker.

In 1799, Turner's mother entered a psychiatric facility. She showed symptoms of having psychological problems from 1785. She died in the facility in 1804.

After his mother's death, Turner moved in with his uncle, Joseph Marshall. Turner first sketched during this period.

In 1786, he went to live in Margate. Turner produced works that included the town and outlying areas. Turner's father displayed and sold his son's paintings in his shop.

In 1789, J. M. W. Turner enrolled in the Royal Academy of Art. In 1790, at the age of 15, Turner displayed his first watercolor in the summer exhibition at the Academy.

Right through these years, Turner was painting. He exhibited paintings every year at the Academy's exhibition, and he traveled widely throughout Britain so he could paint.

In 1802, J. M. W. Turner traveled to Europe. He studied in Paris at the Louvre that same year.

Turner became close friends with Walter Ramsden Fawkes who lived in Yorkshire. Fawkes supported Turner in his work and commissioned him to paint watercolors of the area nearby.

Another friend of Turner was George O'Brien Wyndham. Wyndham, an Earl from West Sussex, commissioned Turner to do paintings of his gardens.

From 1806 to 1819, Turner worked on the Liber Studiorum (Book of Studies). It was a set of 70 plates that he completed, divided into six categories. In 1974, the Turner Museum started in Florida. The museum houses the collection of prints from the Liber Studiorum.

During his career, Turner produced over 2,000 watercolors and 550 oil paintings. He also had over 30,000 works on paper.

J. M. W. Turner grew increasingly eccentric as he aged. He was a loner but was close to his father. He lived with his father for 30 years. Turner's father died in 1829, and it had a significant impact on him.

After his father's death, Turner was prone to episodes of depression.

He never married, but Turner was in a relationship with Sarah Danby for several years.

He then had a relationship with Sophia Booth. Her husband died, and Turner moved in with her and lived there for 18 years as Mr. Booth.

J. M. W. Turner wanted his work kept together in one place, but this was ignored by the government. The British government finally passed legislation, 22 years after his death. Parliament loans Turner's work to museums for display regularly.

Several museums around Britain keep Turner's paintings and his other works. His paintings regularly get loaned abroad, despite Turner's wishes of having them in one place.