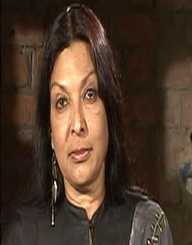 Mallika Sarabhai is an Indian dancer who is also known for her activism on women’s rights.

Mallika Sarabhai was born in Ahmedabad, Gujarat in India on 9 May 1954. Sarabhai’s father was the famed scientist, Vikram Sarabhai. Sarabhai’s father was famous in India as one of the pioneers of Indian space science. Sarabhai’s mother, Mrinalani Sarabhai, was also renowned as a classical dancer in India. Both her parents had a significant influence on the young Sarabhai. Her father imparted a deep love of learning, and her mother was a huge influence on her dancing career.

Mallika Sarabhai was trained in some Indian dance styles such as Bharatanatyam and Kuchipudi. Sarabhai studied at the Indian Institute of Management Ahmedabad and was awarded an MBA. In 1976, she received a doctorate from the Gujarat University for her work on Organisational Behaviour.

Mallika Sarabhai began performing while just a teenager. In addition to stage performances Sarabhai also appeared in a number of Hindi and Gujarati films; her best-known roles appear in, Mutthi Bhar Chawal, Himalay Se Ooncha, and Mena Gurjari. At age fifteen she worked with noted English director Peter Brooks in his play The Mahabharata. Sarabhai had previously appeared in a French version of the play and would reprise her role when Brooks directed a movie version in 1989.

Mallika Sarabhai's mother had founded the Darpana Academy of Performing Arts in 1949 and Sarabhai worked with her mother there and would become the Academy’s director. Sarabhai branched into contemporary dance in the 1990s and performed with the National Dance Institute in New York.

She also began working on choreography and in television. It is estimated that Sarabhai has produced three thousand hours of Indian television as well as anchoring some shows and appearing as an actress. Sarabhai also wrote and performed a number of her works; the best known of these is Shakti: The Power of Women, a solo theatrical show.

Mallika Sarabhai tries to work her activism into her work. Many of her performances and creations deal with the issues of women and the marginalised in society. Sarabhai wrote the play Unsuni, to raise awareness amongst school children about the untouchable class in Indian society. In 2012, Sarabhai directed Women with Broken Wings, a film about women who have suffered from violence.

Sarabhai also raised awareness about HIV in the television programme, Talk Positive. Sarabhai stood as a candidate in the 2009 government elections. She stood as an independent and was heavily defeated by LK Advani. In 2014, she joined the Aam Aadmi Party, an anti-corruption party.

Mallika Sarabhai married Bipin Shah in 1982. Together the couple had two children, Revanta and Anahita. Revanta became a dancer and choreographer like his mother and grandmother before him. Sarabhai and Shah founded Mapin Publishing together; the company focuses on publishing works of Indian art and literature. Sarabhai and Shah divorced in 1989.

Mallika Sarabhai received a Best Film Actress award from the government of Gujarat in 1975. In 2010, she received the Padma Bhushan from the Indian government.