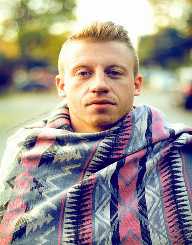 Macklemore is a stage name for rapper Benjamin Hammond Haggerty.

Macklemore’s real name is Benjamin Hammond Haggerty, who was born on 19 June 1983, in Seattle, Washington. His parents Bill and Julie raised him and his brother Tim Haggerty in Kent, Washington.

Ben studied at Garfield High School where he picked up alcohol and drug issues, later transferring to Nathan Hale High School by his worried parents. His stage name was inspired by the superhero that he had to create in Pratt Art School. Ben was introduced to hip-hop when he listened to Digital Underground. When he was at Garfield’s, Macklemore teamed up with other students to produce album Progress in 2000, under group Elevated Elements. During the same year, he released Open Your Eyes under the name Professor Macklemore.

Macklemore did a year of college in Santa Fe, before moving to and graduated from The Evergreen State College in 2009, with a bachelor’s degree.

Before Macklemore became famous, Ben worked at a juvenile- detention facility in Chehalis. He participated in Gateways and writing workshops.

In 2006, Macklemore met Ryan Lewis through Myspace, Ryan and Ben took three years to release extended play: The VS. Their first work was free to download. Ryan was a photographer, videographer, and producer, and he had the skill to mix and engineer music.

Macklemore released his full-length debut, The Language of My World, in 2005. He distributed the album himself, as he was not signed with any record label. He then released The Unplanned Mixtape the next year.

In summer of 2008, Macklemore checked into rehabilitation, blaming his rise of fame for his drug and alcohol addiction. After a stint in rehab, Macklemore teamed up with Ryan Lewis to release their first free EP. Their success prompted them to release The Heist. The album was published in 2012, and the duo went on tours to promote the album. This Unruly Mess I've Made is the 2016 collaboration album by the pair.

Since young, Macklemore struggled with drug and alcohol addiction. He first admitted himself to rehab after his father’s encouragement in 2008. After staying clean for three years, he suffered a relapse in 2011 and then in 2014, when The Heist album was at its peak. Macklemore appeared in Barack Obama’s weekly address to talk about his addition during May 2016.

Macklemore volunteers at homeless shelters like Seattle’s Union Gospel Mission and visiting Children’s Hospital. He believes in reaching out through music, frequently hosting music workshop or supporting people who suffer from addiction.

He co-produced the Hip-Hop Artist Residency program at the EMP Museum in Seattle, together with Paul Allen and Microsoft. Macklemore also contributes to the Recovery Hall.