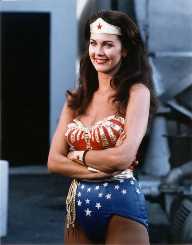 Lynda Carter was born on 24th July 1951, to Colby and Juanita Carter. She was born in Phoenix, Arizona, in the United States. Lynda Carter was musically inclined and started performing from a young age. She was just five when she made her first television appearance on a talent show. Carter was part of a band called Just Us when she was in high school, and she went on from there to join another band with her cousins, called, The Relatives.

Although she began to study at Arizona State University, Lynda Carter dropped out to continue pursuing her musical career. She sang with a band called The Garfin Gathering in 1970. They performed with no luck in San Francisco, and Carter returned home to Arizona in 1972.

Lynda Carter started turning heads in 1972 when she won a beauty contest in Arizona, and she went on from there to be crowned Miss World USA. During the same period, Lynda Carter was taking acting lessons, and she started making cameo appearances on popular shows such as Starsky and Hutch, and Matt Helm.

Her break came in 1975 when she was cast as Wonder Woman, one of the DC Comics characters. The television series was a worldwide hit, and it ran until 1979. Carter is still identified with Wonder Woman today, over 40 years later. There have been several accolades for Lynda Carter. DC Comics named Carter in their Fifty Who Made DC Great in 1985. DC Direct released a 13-inch statue of Lynda Carter as Wonder Woman in 2007 as a limited edition, and then re-released it again in 2010.

Lynda Carter continued to act, and from 1974 to the present time, she has been in nine movies, and over 30 television shows, including Wonder Woman and Supergirl. In 1977, she signed a modeling contract with Maybelline cosmetics.

Lynda Carter also continued with her music, and she released her first album in 1978, called, Portrait. Her other three albums were released in 2009, 2011, and 2015 respectively.

2016:   Lifetime Achievement Award – The Gracie Awards
2018:   Recipient for an upcoming star on the Hollywood Walk of Fame

Lynda Carter married Ron Samuels in 1977. Samuels was her talent agent at the time. The couple divorced in 1982.

In 1984, Lynda Carter married Robert A. Altman, an attorney practicing in Washington, D.C. The couple has two children, James and Jessica.

Lynda Carter became a spokeswoman for irritable bowel syndrome in 2003, as her mother had suffered from the disease for over 30 years.

Lynda Carter is also a strong supporter of Susan G. Komen for the Cure, legal equality for LGBT people, and she also supports Pro-Choice rights for women.