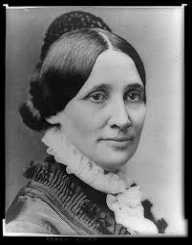 
American first lady (1877-81) Lucy Ware Hayes was born on August 28, 1831, in Chillicothe, Ohio, United States of America. She was the wife of the 19th President of the United States, Rutherford B. Hayes.

Lucy Hayes had the distinction of being the first First Lady to have possessed a graduate degree. Her father, Dr. James Webb, died while serving the cholera-infected patients during a visit to his family home in Lexington, Kentucky, in 1833. Lucy’s mother, Maria Cook, raised her three children single-handedly, including Lucy and her two older brothers, after the death of her husband.

Both Lucy’s parents were ardent supporters of the abolition of slavery. Her father visited his family home before his death to free around 15-20 slaves he had inherited from his aunt.

After the death of Lucy’s father, many friends and well-wishers of Lucy’s mother advised her to earn some money by selling off these slaves. Maria reiterated her commitment towards the abolition of slavery by expressing her resolve to earn money by washing if required, before even thinking of selling a single slave.

At that time, Wesleyan did not allow females to study at the institute. She later studied at Cincinnati Wesleyan Female College from where she received her graduation in 1850. In comparison to the prevailing circumstances of the era, she was well-educated at that time.

Lucy Hayes first met her future husband Rutherford B. Hayes at Ohio Wesleyan University as a fourteen-year-old teenager. At that time, 23-years-old Rutherford didn’t find Lucy old enough to be attracted to. However, five years later, they met once again as members of a marriage party.

This time Rutherford was so awe-struck by the charm of 19-year-old Lucy that he presented her the gold ring he found in the wedding cake. Lucy returned the wedding cake ring to Rutherford after their formal engagement. Rutherford, on his part, wore that ring for the rest of his life. The couple tied the nuptial knot in a simple ceremony on December 30, 1852, at Lucy’s mother’s house in Cincinnati.

Lucy Hayes spent the first two decades of her marriage bearing eight children. She took due care of the five children who survived infancy out of those eight. When, in 1861, a civil war broke out between the northern United States and the southern United States, Rutherford volunteered to join the Union Army. Lucy, while supporting his decision to join the army, used to visit him in army camps sometimes even with her mother and children.

Rutherford suffered injuries in September 1862 in a battle in Middleton, Maryland. Lucy rushed to visit him and inadvertently landed in Washington due to a communication error. She brought Rutherford to Ohio later from Maryland. When Rutherford rejoined his regiment, Lucy became a regular visitor to their army camp. She eventually earned the nickname of ‘Mother Lucy’ for her affectionate service for the well-being of the soldiers.

Rutherford joined the US Congress in 1865. Lucy regularly attended the congress sessions during that time and was an avid listener to the congressional debates. She also performed her social obligation with her proactive role in social service and charitable activities.

He was elected for a third term in 1876. Lucy regularly accompanied her husband in most of his official visits, especially those taken for the humanitarian cause. She often visited prisons, correctional homes, mental hospitals, and institutions, catering to the needs of the physically challenged people.

First Lady Of The United States

There was a surge in the number of female journalists during the late nineteenth century. They all were vying to cover the events attended by the first lady. Her attractive, sweet, and charming personality made her one of the most widely-acclaimed first lady of the United States.

During those days, there was no custom to provide personal staff to the first lady. Hence, Lucy used to invite her nieces, cousins, daughters of friends to the White House to successfully host social events with their help. Being an animal lover, she also made White House abode of some animals, including a cat, a goat, and two dogs as part of the first citizen’s family.

Lucy Hayes was against all kinds of alcoholic beverages. In her over-enthusiasm, she once ensured that only non-alcoholic beverages would be served to the guests invited to the state dinner. The move earned her the nickname ‘Lemonade Lucy’.

Lucy Hayes died on June 25, 1889, at the age of 57, a few days after suffering a heart attack. The world remembers her for her simplicity, compassion, and understanding of political events.