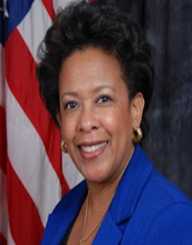 Loretta Lynch is known to be the first Black American and the second woman to be appointed as the Attorney General in the U.S.; she served in the seat between 2015 and 2017. Lynch also served as United States Attorney for the Eastern District of New York during both President Bill Clinton and President Obama.

Loretta Elizabeth Lynch was born in Greensboro, North Carolina on 21st May 1959. Her father was pastor at Baptist church while her mother was a librarian at a nearby school.

At a young age, Lynch used to join her father in watching court proceedings at Durham. It is during this time when she developed the passion in law.

She went on to earn a Bachelor of Arts from Harvard University in 1981. After her graduation from the university, she opted to take another degree in the same university where she graduated in 1984.

After completing her law degree from Harvard, Loretta Lynch moved to New York where she found a job as a litigator at Cahill, Gordon & Reindel Firm. She worked for the firm for ten years.

She later took a government job as a prosecutor for the U.S. attorney team of Eastern District of New York, where she oversaw the prosecution of several police officers in Abner Louima case.

After the resignation of Eric Holder from the office of the Attorney General, President Obama appointed Loretta Lynch for the post in 2014. She was later confirmed by the senate judiciary committee for the seat.

Her name, however, took an unusually long time before confirmation. It took the Senate 166 days to confirm her appointment. The delay was primarily because of a role she played in settling a $ 1.9 billion money laundering case she had handled.

Her first major assignment was to see through the prosecution of Dylann Roof, a man who was suspected to be involved in Charleston church shooting.

Loretta Lynch was seen as a potential replacement of Antonin Scalia who had died while holding the office of the Supreme Court Justice. She, however, requested the White House to withdraw her name from the potential appointees.

After the 2016 nightclub shooting, Lynch appeared in various television shows to explain to the public the progress of the investigation by the FBI.

Loretta Lynch was met by controversy in 2016 after she privately held a meeting with the Democratic candidate Hillary Clinton who was already under an investigation by the FBI over the Email Probe.

She, however, denied talking about the case with Clinton sighting that the meeting was on family issues

The Senate Judiciary Committee investigated in 2017 to probe any interference of Lynch in the Clinton Email Case. The investigation later found no wrongdoing by the former Attorney General.

In 2007 Loretta Lynch married Stephen Hargrove, a divorcee with two children from his previous marriage.