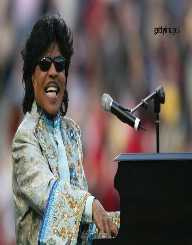 Richard Wayne Penniman, better known by the name Little Richard, was born on December 5, 1932, in Macon, Georgia, USA. His parents were Leva and Charles Penniman. He also has eleven siblings. He was a member of a highly religious family as a child. Because of this, he often sang in the church choir, which was one of his first instances of singing in public.

However, he was later kicked out of his parent’s house when he was a teenager because of his effeminate tendencies (and because his father suspected that he might be gay). Charles Penniman was later murdered when Little Richard was only 19; by this time, the father and son were estranged from each other. After he moved out of his parent’s house, he lived with a club owner, Ann Johnson.

As a teenager, Little Richard attended Hudson High School. Little Richard played in the band while at this school, which helped him to further hone his musical talents.

In the late 1950’s through the early 1960’s, Little Richard put his music career on hold so he could attend college at Oakwood College. While there, he focused his studies on theology.

Little Richard learned how to sing and play instruments when he was very young. Playing in the band throughout high school also helped him to become more educated in playing various musical instruments. One of the instruments that he excelled at playing was the piano.

Little Richard began playing music professionally in the late 1940’s. One of the first bands that he played with was Dr. Hudson’s, Medicine Show. Throughout the early 1950’s, he played with various other bands like Broad Follies and Sugarfoot Sam. Some of the most famous early bands he was a member of were Camden and Tempo Toppers.

Little Richard continued to work with various record companies in the 1970’s. He started the decade by working with Reprise records but by the end of the 1970’s he had worked with six other record companies, including United, Joy, and Dynasty Records. Some of his most famous albums from this decade included The King of Rock and Roll, Southern Child, Talkin’ ‘bout Soul, and Right Now!

After 1979, he didn’t release another album until 1986. Lifetime Friend would go on to be his only album of the 1980’s, which he released with WEA Records. The reason for this was likely due to the start of his acting career.

Little Richard later released two albums in the 1990’s (both in 1992). The first of these albums was Shake it All About, which was released by Disney. He also released Little Richard Meets Masayoshi Takanaka with Eastworld. The latter of these is his most recent album to date.

Little Richard had his first acting credit in the film Don’t Knock the Rock in 1956. However, after this, he did not return to acting until the mid-1980’s. He returned to the screen in 1984 when he appeared in an episode of Late Night with David Letterman. Besides talk shows, he also appeared in several other television shows and films. Some of his early acting endeavors include Bustin’ Loose, Down and Out in Beverly Hills, and Purple People Eater.

His acting career picked up in the 1990’s. He continued to work mostly in small roles in episodes of television shows and films, while occasionally appearing on a talk show, like The Drew Carey Show. Some of his most famous works from the 1990’s include Sunset Heat, The Naked Truth, Last Action Hero, Baywatch (1995), Nightman, and Homeboys in Outer Space.

His acting career ended in 2000 after he appeared as a musical guest on The Tonight Show with Jay Leno. Since then, his music has continued to be used in television shows and films.

All of his awards are due to his fantastic music career. Some of his most impressive awards are listed below.

He has an honorary degree from Mercer University, which he was given in 2013.