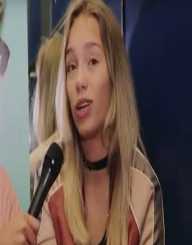 Musical.ly has created many social media stars and internet celebrities. Twins Lisa and Lena are also part of that group of social media sensations who found their fame by creating video clips.

They are known together as LisaAndLena, and their total fan following exceeds 20 million. Lisa is also very popular on Instagram where she has over 11 million people following her updates.

She has three siblings – her twin sister Lena, a brother Tim and another sister Tayra.

Around July 2015, Lisa & Lena started recording videos of themselves lip-syncing popular songs and posting their content online. Their videos were received very well, and soon they had explosive growth in their fan base. Part of the reason their videos became so popular is their use of breathtaking backgrounds and shoot locations.  They create travelogues and work as models. With their popularity skyrocketing, Lisa & Lena have launched their clothing line – Dream it & Do it.

They began it in association with the clothing company named Compose, for which they used to model. However, in 2016, unable to cope up with the demands of Compose, they ended the agreement and opened their store. They prepare their videos with the greatest of care – the clothing they wear, the locations they choose for the video and even their dance moves. This makes their videos masterpieces that generate millions of views within days.

Although they lip-sync in their videos, they demonstrate a very good understanding of the music, and this is what makes their videos even more entertaining to watch. Viewers can relate and connect with them, and they regularly interact with their followers.

Lisa and Lena bring a lot of variety in their content from casual, fast songs to slow tunes and also use different themes so you can always expect something new from them. Already, professional artists, Lisa & Lena are taking their career very seriously and plan to make a major impact in the world of fashion & style with their content and their clothing line. They have also collaborated with other musical.ly stars in some of their videos, and they seem to continue entertaining young viewers for quite a few years to come.

One year after they started sharing their content on musical.ly, Lisa & Lena were awarded the Golden Bravo Otto as Social Media Celebrities. In 2017, they also received the Shorty Award – for being the Muser of the year.

Although they are internationally famous, they are still teenage girls who are very attached to their parents. They don’t share the details of their private lives despite fans pleading them to reveal more details.

They are also very careful about the content they create and seek their parents’ advice on every video they create.