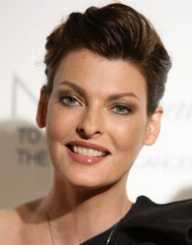 Once, Linda Evangelista was voted the best supermodel of all time by fashion fans. With a career spanning over two decades, she has graced all major fashion magazines and runways in the world.

Linda Evangelista was born to Italian Canadian parents in Ontario, Canada. Her date of birth is May 10, 1965. She was the second born child out of the three siblings. Her working-class parents were practicing Roman Catholics. The father, Tomaso, worked for American car manufacturer General Motors. Her mother, Marisa, worked as a bookkeeper. Linda attended Dennis Morris Catholic High School.

Linda Evangelista's interest in modeling started early in her childhood. At the age of twelve, she enrolled in a modeling school. There, she learned about how to poise and etiquette. She landed some local modeling jobs in Ontario. In 1981, she contested in the Miss Teen Niagra Beauty Contest. She did not win. The exposure she got was enough to capture the attention of scouts.

She was spotted by Elite Model Management of New York. She then started modeling in Japan. Her stint in the Far East was short. She protested being part of a nudity shooting. The Canadian embassy in Tokyo helped her get back to Ontario. Dejected, Linda decided to quit modeling.

To realize her dream, Linda Evangelista relocated to New York. In 1984, she signed up a professional modeling contract with Elite Model Management. Linda was 19 years. The fashion agency sent her to Paris. That November, Linda was the cover model on the French fashion magazine L’Officiel. In total, she has appeared as a cover model 700 times for various magazines. She has also appeared in all the top global magazines. The fashion personalities who have worked with her are numerous. Notable examples are Versace, Charles Gaultier, Salvatore Ferragamo, Yves Saint Laurent, Dolce and Gabbana among many.

In 1988, when she turned 23, Linda changed her hairdo. She shed off her long blond hair to a short bob. Her new appearance made her lose several shows. In a turn of events, fashion fans embraced her new looks. Under pressure, fashion houses took her back.

Linda Evangelista is one of the five supermodels in the fashion industry. The others are Naomi Campbell, Cristy Turlington, Cindy Crawford, and Tatjana Patitz.

Her beauty and charm have led her to feature in 7 documentary films and two music videos.

In her illustrious career, Linda Evangelista has had several milestones. She received the VH1 Fashion Awards Lifetime Achievement Award in 1996. Linda was awarded a star on Canada’s Walk Of Fame.

Linda Evangelista married Gerald Marie in 1987. Marie was the Elite Model Agency owner. The union was short lived. In 1993, the couple divorced. Linda had a liking for high profile people in the society. She engaged Kyle MacLachlan in 1995. The engagement was broken in 1998. She again had a high profile relationship with former French Goalkeeper Fabien Barthez. The couple broke up in 2002.

She has a son born in October 2006. In the beginning, she never disclosed the paternity of the child. But five years later in 2011, she filed for child support. Linda named French billionaire Francois Pinault, as the biological father. At the time, Pinault was married to Mexican actress Salma Hayek. The court case ended in an out of court settlement. The details of the agreement were never disclosed.

Linda Evangelista was as famous as she was controversial. She once said that she would never wake up for anything less than USD 10,000 a day. The statement grieved her fans but did not dampen her career.

She is a self- confessed Roman Catholic.

Linda Evangelista has continued to inspire many women around the world. Famed celebrities like Victoria Beckham have cited her as their life idols.

Linda is known as the chameleon of the fashion industry. Her ability to re-invent herself has made her the most versatile model. At the age of 53, most models will have disappeared from the fashion scene. Linda continues to appear on magazine covers and editorials. She has proven that age is just a number in mind.