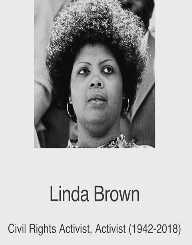 Linda Brown was born February 20, 1943. She was an African American civil rights activist. She was renowned for campaigning for educational equality. Linda died at the age of Seventy Five years.

Linda Brown was born Linda Carol Brown on February 20, 1943, in Topeka, Kansas. She was born to Oliver Brown and Leola Brown. She was brought up alongside two siblings. Her parents tried to enroll her to the Summer Elementary School under the direction of the National Association for the Advancement of Colored People. The elementary school was an all-white school, and hence she was not allowed to join due to her color.

Her father Olive Brown later on alongside other African American parents sued the Topeka Board of Education at the Supreme Court. The case to be heard first turned out to be Brown v. Board of Education due to its alphabetical arrangements. She at this time did not have the right to attend the segregated schools. She later joined junior high school.

In 1954, the case was decided to their favor. In 1959, Linda Brown alongside her family moved to Springfield, Missouri. Two years later, they again moved back to Topeka following the death of her father. She then joined and studied at the Washburn and Kansas State University. She later continued to advocate for Equal education rights.

Linda later served at the Brown Foundation as a head start teacher and a program associate. She later became a public speaker. She after that worked as an education consultant. In 1977, she filed another case at the Supreme Court against Kansas Board of Education claiming the continuity of segregation.

Linda Brown got married to Charles D. Smith with whom she had two children. They later divorced. She then got married to Leonard Buckner who later died. Linda again got remarried to William Thompson with whom she stayed with until she met her death. She died on March 25, 2018, in her home in Topeka, Kansas. She died at the age of Seventy Five years.