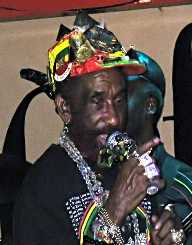 Lee Perry is a Jamaican music producer and performer.

Rainford Hugh Perry was born in the town of Kendal, Jamaica, on March 20, 1936. His parents’ names were Ina and Henry. He grew up in poverty. He moved to the city of Kingston. He worked as a handyman and as a janitor.

Perry’s first hit single was called “People Funny Boy.” It mocked Joe Gibbs. He started working with his band, The Upsetters. He began releasing albums in 1969. His music became famous not only in Jamaica but also in the United Kingdom.

He was known for his unique style and innovative techniques. In 1973, he built a studio in his yard, and he called it the Black Ark. He worked with many artists, such as Bob Marley, Max Romeo, Junior Byles, and others. He produced their songs, and he also recorded his own. In 1978, his studio burned down. His success also faded away.

Lee Perry revived his career in the mid-1980s. He decreased his use of alcohol and drugs. He toured the United Kingdom and the United States. He worked with the British producer Adrian Sherwood and with the hip-hop group Beastie Boys. In the early-2000s, he moved to England.

After that, he moved to Switzerland. He released several albums and singles. He collaborated with artists such as Keith Richards, Ari Up, Panda Bear, Sly Dunbar, Bernie Worrell, and many others. He performed across Europe. His music was used in the video game Grand Theft Auto. He held an art exhibit, called “Secret Education,” in an art gallery in Los Angeles.

Lee Perry won a Grammy for Best Reggae Album for Jamaican E. T. He also won a Grammy Lifetime Achievement Award, and he was inducted into the Grammy Hall of Fame. He has received many nominations.

The Institute of Jamaica gave him the Gold Musgrave Medal. In 2011, Adam Bhala Lough and Ethan Higbee produced the documentary The Upsetter: The Life and Music of Lee Scratch Perry.  In 2015, the German director Volker Schaner directed Lee Scratch Perry’s Vision of Paradise.