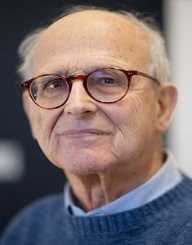 Frederick Reines was an American physicist. He won a share of the 1995 Nobel Prize in Physics for his co-discovery of the neutrino with Clyde Cowan in the neutrino research. In the early 1950s together with his partner, Cowan, Reines first developed the equipment and techniques which they used to detect neutrinos. Before that, neutrinos were considered undetectable. Their discoveries proved to be very significant to international research in the field. It is this research that ultimately concluded with Reines winning the desirable Nobel Prize.

Frederick was born in Paterson, New Jersey on March 16, 1918. He was a child to Gussie (Cohen) and Israel Reine who were Jewish emigrants from the same town in Russia. Fredrick had three elder siblings who influenced him to do well in school. Frederick received a middle-class upbringing. He was born in the United States to Jewish parents who were emigrants from Russia. It was during his final year at high school that Frederick became intensely interested in science. He chose to become a physicist.

He earned a degree in mechanical engineering from Stevens Institute of Technology in Hoboken, New Jersey. He commenced his work in Manhattan Theoretical Division at the Manhattan Laboratory after completing his masters. His mutual work with Clyde Cowan all through the line of his career led to many significant discoveries. Evidently in the subject of neutrino research and the end got Reines a share of the Nobel Prize.

Frederick gained motivation to do well in school from all his elder siblings who were good students. They all were much focused and took their studies seriously. Contrary to expectations, Frederick excelled in mythical and history courses during his high school years, but he did not do quite well in mathematics or sciences.

However, he started to develop a keen interest in science subjects during his final year at Union Hill High School. Besides his love for science, he was also a talented singer. He loved music throughout his life. He graduated from high school in 1935.

Frederick enrolled in Stevens Institute of Technology, New Jersey at Hoboken. Reines had initially planned to attend the Massachusetts Institute of Technology. In 1939, he earned his undergraduate degree in mechanical engineering. He further studied for Master Degree in mathematical physics and did a master’s thesis with the title ‘A Critical Review of Optical Diffraction Theory.’

For his doctoral research, Frederick went to New York University. In 1944, He earned his Doctor of Philosophy (Ph.D.). It was Richard D. Present who supervised the thesis he wrote on ‘Nuclear fission and the liquid drop model of the nucleus.’

Frederick was offered a spot as a staff member under Richard Feynman in the Theoretical Division at the Los Alamos Scientific Laboratory. He got a placement even before he completed his thesis in 1944. There he was assigned to work on the Manhattan Project. He was soon made a Group Leader in the Theoretical Division. Notably, since his work at the laboratory became highly productive, he was given the responsibility to supervise the project.

Frederick also got the opportunity to work with some truly brilliant minds. He soon started to come up with experiments for the testing of nuclear weapons in the Marshall Islands in 1951. Later, he was named a delegate to the Atoms for Peace conference in Geneva in 1958.

In the 1950s Frederick, formed a fruitful partnership with Clyde L. Cowan and the two of them came up with the Cowan–Reines neutrino research. It was through this experiment that the survival of the antineutrino—an impartially charged subatomic particle with low mass—was confirmed.

After a successful test, Reines started to focus most of his efforts on the study of the neutrino’s properties and interactions in the mid-1950s. His neutrino study opened up new job avenues for him. Following his research experiment, he was made the head of the physics department of Case Western Reserve University from the year 1959 to 1966.

Along with his many other responsibilities, Frederick continued with his neutrino research. He also led a group that was the first to detect neutrinos created in the atmosphere by cosmic rays. Reines became the first dean of physical sciences in 1966 at the new University of California, Irvine (UCI). During his time as the dean of the university, he inspired some of his graduate students to make an effort towards the advancement of medical radiation detectors.

In 1988, he retired from UCI. Moved by his passion to empower other young physicists he continued teaching for three more years. After 1991, he stopped to explain but remained on UCI's faculty.

Frederick Reines received many awards for his outstanding works. In 1981, he won the 'J. Robert Oppenheimer Memorial Prize' later in 1985, he was awarded the 'National Medal of Science.' Also, in 1989, he was honored with the 'Bruno Rossi Prize' in 1990, he got the 'Michelson–Morley Award' the 'Panofsky Prize' in 1992, and the Franklin Medal in 1992. The awards he got were a testament to the fact that he made a significant impact on the subject matter of science especially physics.
He brought about significant contributions to the science world. Consequently, he got elected as a member of the National Academy of Sciences in 1980. In 1994, he was selected as a foreign member of the Russian Academy of Sciences. In 1995, Frederick Reines also received the Nobel Prize in Physics "for the detection of the neutrino.” He got half of it while the other half went to Martin L. Perl "for the discovery of the tau lepton."

On August 30, 1940, Frederick Reines married the love of his life, Sylvia Samuels. Together they had two children, Robert and Alisa. He suffered from ill health, and his well-being deteriorated significantly. He died at the age of 80 on August 26, 1998.