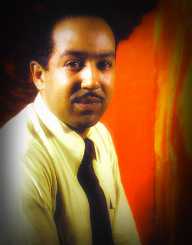 James Mercer Langston Hughes, the famous American poet, and the author was born in Joplin, Missouri on February 1, 1902. His first poem was published in 1921, and the first book was printed in 1926. He is known for his many plays, poems, and articles. He was a regular contributor to the Chicago Defender. He breathed his last on May 22, 1967.

Langston Hughes was born to James Nathaniel Hughes and Carrie Mercer Langston. The parents broke up shortly after his birth and his grandmother Mary Patterson Langston took charge of him till his teens. His childhood was mainly spent in Kansas. Meanwhile, his father left for Mexico, while his mother kept changing places looking for jobs.

After Mary’s death, Hughes stayed with James and Mary Reed, who were family friends for two years. He went back to his mother in Lincoln, Illinois after her remarriage and both roamed around a bit and finally made Cleveland, Ohio as their residence. His literary journey began during this period, and he started writing poetry. Hughes’ poetry was mainly influenced by the works of Walt Whitman and Carl Sandburg.

Hughes wrote his first poem of Jazz “When Sue Wears Red.” His poems were published in the literary magazine of his school regularly. His attempts to get his poems published in various other poetry magazines met with inadequate response.

After his graduation from high school in 1920, Langston Hughes stayed with his father in Mexico for about a year. In 1921, his “The Negro Speaks of Rivers” published in The Crisis magazine was much acclaimed. Hughes joined the engineering course at Columbia University in the United States and took a significant part in Harlem Renaissance, a promising cultural group of Harlem. He left Columbia University in 1922 hurt by the racial discrimination prevailing.

After his short stint with Columbia University, Langston Hughes tried his hand at various jobs in New York. He was able to land a job as a steward on a freighter ship, the S.S. Malone in 1923. He visited Africa and Spain as a part of the voyage. After his departure from the ship in 1924, he lived in Paris for some time. For a short time in 1925, he assisted Carter Woodson, a historian at the Association for the Study of African American Life and History.  He persisted with his literary pursuits by publishing his poetry during this period.

Langston Hughes worked in various jobs after his return to the United States in 1925. He came in contact with famous American poet Vachel Lindsay during his job as a busboy in a hotel in Washington DC. Lindsay was highly appreciative of his poems and was responsible for the recognition of literary talents of Hughes in 1925.

The Opportunity magazine awarded the first prize to “The Weary Blues,” a poem by Hughes in the literary contest conducted by the magazine in 1925. Lincoln University, Pennsylvania offered him a scholarship for further studies. His first collection of poems The Weary Blues was published by Knopf with the influence of reputed novelist and critic Carl Van Vechten in 1926. The book gained immediate popularity because of its portrayal of urban blacks and use of Jazz poetry. Hughes came out with his second poetry book in 1927, Fine Clothes to the Jew. He became a B.A graduate from Lincoln University in 1929.

In 1929, Langston Hughes published his first book, Not Without Laughter. The novel was financially a great hit. It also got him the Harmon Gold Medal for literature. The same year he graduated from Lincoln University. Hughes spent the 1930s travelling often to give lectures in the United States, Japan, Soviet Union and Haiti. He came out with his first book on short stories, The Ways of White Folks. 1937 saw Hughes in a new role as a war reporter for many newspapers of America. Meanwhile, he continued to pursue his literary career.

In the 1940s, Langston Hughes started writing for Chicago Defender, and he introduced a comic character “Simple.” Simple represented a black commoner who expounded various ethnic issues of the urban black in its multiple dimensions. Simple became a famous character and later became the lead character in many of books and plays of Hughes. He also wrote his autobiography, The Big Sea in 1940.

Hughes worked as a lecturer in Atlanta University and Chicago University and taught creative writing in the late 1940s. He wrote lyrics for Broadway musical Street Scene and from the income earned he could purchase a house in Harlem.

Decades of 1950 and 1960 saw a continuous inflow of literary works from the pen of Langston Hughes. These included many works of “Simple” series, the play Troubled Island, and a collection of poems The Poetry of the Negro. Other works during this period include the second part of his autobiography, I Wonder as I Wander, a new collection of his poems and also English translations of the poems of Gabriela Mistral and Federico Garcia Lorca. His work “Panther and the Lash” was published in 1967 after his death.

Langston Hughes was the recipient of the Witter Bynner Undergraduate Poetry Prize. He received the Guggenheim Fellowship which took him to Russia and Spain.

The end of Langston Hughes came on May 22, 1967, in New York City. The cause of death was attributed to prostate cancer and the consequent problems. His memorial service was full of jazz and blues music. There were hardly any verbal acclamations. The ashes of Hughes are buried at the doorway of Arthur Schomburg Centre for Research in Harlem. The dedication at the place contains the line “My soul has grown deep like the rivers” from Hughes’s poem “The Negro Speaks of Rivers.”

Hughes’s home at Harlem on East 127th Street has become a landmark in New York City. The same can be found in the National Register of Places. Even today the memorable works of Hughes continue to be printed and translated all around the world.