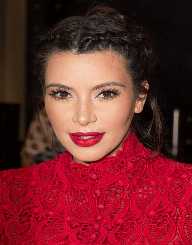 Kimberly Noel Kardashian was born on October 21, 1980, to Kris and Robert Kardashian. She has two sisters and a brother named Khloe, Kourtney and Rob Kardashian.

Robert was the lawyer who represented O.J. Simpson in his murder trial. Simpson was also named Kim’s godfather. Then in 2003, Robert passed away from cancer.

Kim went to the same preschool as Paris Hilton. It was during her twenties that Paris became Kim’s closest friend. Then she went to the Roman Catholic girl’s school called Marymount High school.

Then in 1991, Kris and Robert divorced, and Kris married Bruce Jenner, a former Olympian and an athlete later that same year. They were together up until Bruce transitioned into Caitlin Jenner in 2016. It was during this marriage that Kim ended up with six more siblings. There were Kendall and Kylie who are twins. Then there were Brody, Brandon, Casey, and Burt.

Later in 2007 after the tape was released, Kim Kardashian and her family started a reality television series called Keeping up with the Kardashians. This show, lead to 2 other spinoffs. One was Kourtney and Kim takes New York and the second was Kourtney and Khloe take Miami.

The family members that were involved with her in the TV series are Kris Jenner, Bruce Jenner (now Caitlin), Kourtney, Khloe, and Rob Kardashian, and Kendall and Kylie Jenner.

During one of the episodes, they discuss an offer made by Playboy to pose nude in the magazine. She did the photo shoot in December of that year.

Kim Kardashian made a feature film debut in 2008 with a disaster film titled Disaster Movie. The film was a spoof. She played the character named Lisa. On March 30th of this same year, Kim was a guest host at WrestleMania XXIV. In August she became a guest judge on America’s next top model.

Then in September Fusion Beauty and seven bar foundation used Kim as the face of the campaign called kiss away poverty. The goal was for every lip fusion lip-gloss sold; the company would donate one dollar to fund women entrepreneurs in the United States. October saw that Kim released her fragrance titled Kim Kardashian.

Also in 2008 during its 7th season, Kim Kardashian participated in dancing with the stars. She was a partner with Mark Ballas. She didn’t last long. She was eliminated at the end of round 3.

She had a cameo appearance in 2009 on the show How I met your mother. In April of 2009 her production company Kimsaprincess Productions, LLC produced a workout series on DVD.

In April of 2010, Kim caused more controversy by holding a kitten by the scruff of the neck. Because she, along with sisters Kourtney and Khloe, are involved with the retail and fashion industry, they have created several clothing lines and fragrances. PETA (the animal rights activists) criticized her for wearing fur coats on many occasions.

Kim Kardashian created a video to Jam (turn it up) in December of 2010. She did the song for Kourtney and Kim takes New York. Kanye did a cameo in the video. She premiered the song on New Year’s Eve at a party in Las Vegas. She was asked if she was planning an album and she said no that it was only one song.

Over the years Kim has created a significant social media presence online. She is all over the internet today. Kardashian has tens of millions of Twitter and Instagram followers. In 2016 she became a top ten most followed person on Instagram.

Kim Kardashian released a successful mobile game called Kim Kardashian: Hollywood in 2014. She also has a clothing line and other products associated with her name. She even published the Selfie Photo Book in 2015.

Kim Kardashian married Damon Thomas in 2000. Then in 2004, they divorced. She had said the reason was due to emotional and physical abuse. Later in 2011, she married NBA player Kris Humphries. In just 73 days after their marriage, the couple divorced.

It was 2012 when she began dating Rapper Kanye West. The happy couple was excited that they welcomed a daughter that they named North West. Baby North was born on June 15, 2013. It wasn’t until May 24, 2014, that the couple got married. Then again on December 5, 2015, they welcomed their second baby. This time it was a son that they named Saint West. During their relationship, the media called Kim and Kanye “Kimya.”

According to Time magazine’s 2015’s 100 most influential people, Kim Kardashian had made the list. Vogue dubbed her a pop culture phenomenon in 2016. She is considered the highest paid reality star of 2015. She earned more than $53 million. Over her career, she has amassed a net worth of $65 million.