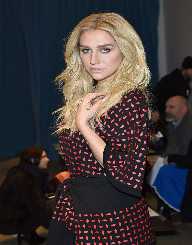 Kesha Rose Sebert was born on March 1, 1987. Her place of birth in Los Angeles, California. Kesha is an American singer and a songwriter. She is also a rapper. Her breakthrough in her career came in 2009. This is after she appeared in Flo Rida’s No. 1 single “Right Around.” After this, she went on to release “TikTok.” This was after signing a contract with RCA. Her first album Animal came around in 2010, and it was highly ranked on the charts. Two years later came to her second album named Warrior. In 2014, Kesha filed a legal complaint against her producer Dr. Luke, claiming that he had sexually harassed her.

Right from the time, Kesha was young, her mother Pebe gave her the opportunity of experiencing music. Pebe was a songwriter, and she was successful after writing "Old Flames Can't Hold a Candle to You" for Dolly Parton and Joe Sun. Her experience in music made it easy for her to train Kesha into following the right path to a successful music career.

Life was a struggle for Kesha and her family when she was young. Her mother lacked enough money to support Kesha and her brother. It was when she was four years old that her mother shifted to Nashville and fortunately she landed a songwriting contract.

When Kesha was an adolescent, she spent ample time with her mother as she tagged along while heading to the studios. Pebe, her mother, encouraged Kesha to pursue her singing interests. Later on, Kesha went to a music school and learned songwriting in the process.

When Kesha was 17 years old, she quit high school with the intentions of pursuing her music career. This was the point she got her stage name ‘Kesha.’ Shortly after, she shifted to Los Angeles where she met her first producer Dr. Luke. Luke had previously worked with Kelly Clarkson and Katy Perry in their hit singles.

Kesha’s breakthrough came through when she was featured in an unpaid hit single for Flo Rida’s song, “Right Round.”

After featuring in Flo Rida’s hit song, she landed a vital contract with RCA. With this deal in place, her first single, “TikTok” came through. This was a hit song, and soon it became the number 1 downloaded song in America. In 2010, it was ranked top in Billboard pop charts.

Kesha released her first album in January 2010. This album was named Animal. The record was a success as it was highly ranked on the charts. Aside from “TikTok,” she later released other songs that got to Top 10. These were "Your Love Is My Drug" and "Blah BlahBlah." Her successful album Warrior was released in 2012. The hit single “Die Young” was featured on this album.

Kesha filed a lawsuit against her producer Dr. Luke in 2014. She alleged that he had sexually harassed her. In turn, her producer filed a suit against Kesha and her mother for insulting him. The contract that Kesha signed with Dr. Luke made it impossible for her to record with other studios.

Kesha began dating Brad Ashenfelter in 2014. She is a vegetarian.