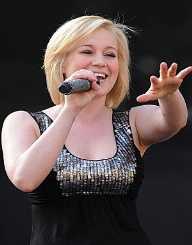 Kellie Dawn Pickler was born on June 28, 1986, in Albemarle, North Carolina. Her mother left her father and her when Pickler was two years old, but later returned and took custody of her for two years. After this happened, Kellie’s custody was given to her grandparents, and they continued to raise her until she was an adult. Her grandfather was a former electrician and had a major influence on her life.

Pickler attended the North Stanly High School in New London, North Carolina. In school, she was a cheerleader and participated in beauty contests. She graduated in 2004 and sang “On the Side of Angels” in her graduation. After graduation, Pickler began working as a waitress, but in 2005 made her first appearance on the WSOC-TV’s Gimme the Mike! Charlotte contest. She placed second in the contest and the same year also won the Miss Stanly County pageant and competed for Miss North Carolina title.

In 2005, Pickler auditioned for the popular television reality contest American Idol. She song Since U Been Gone” by Kelly Clarkson and “A Broken Wing” by Martina McBride. Her audition was successful, and Pickler reached the Top 12. During the show, she was one of Simon Cowell’s favorites. However, she was eliminated during the show but continued to appear on TV shows to promote American Idol. Shortly after the show, Pickler went to Nashville, Tennessee to pursue her dream of a recording career. In 2006, she was signed by 19 Recordings/BNA Records.

In 2006, Pickler released her first single and video “Red High Heels,” which earned a nomination from the CMT Video Awards for Breakthrough Video of the Year. Soon after the release of her first single, her debut album Small Town Girl was also released and topped the Billboard Top Country Albums list. Its first week, the album sold over 79,000 copies. In 2007, she embarked on a tour with Brad Paisley and his Bonfires & Amplifiers tour.

In 2008, Pickler released her single “Things That Never Cross a Man’s Mind,” meanwhile she was working on her second studio album. During the 2008 AMC Awards, she performed her new single “Don’t You Know You’re Beautiful.” Her second album Kellie Pickler was released in September and debuted at No. 1 in country hart. That year she was nominated for the CMA New Artist of The Year award. The following year she was nominated for the Female Video of the Year award but lost to Taylor Swift. Pickler accompanied Swift on her Fearless Tour in 2009 and later launched her first headline concert tour.

In January 2012, Pickler released her third album, produced by Frank Liddell named 100 Proof. The lead single “Tough” was released earlier in 2011. The album debuted at No. 7 on the Billboard 200 chart and No.2 on country charts. In 2012, she parted with Sony Nashville and signed with the independent record label Black River Entertainment. With her new label, Pickler released the song “Someone Somewhere Tonight,” which served as the lead single for her new album The Woman I Am. The new album was released in November 2013.

In 2007, Pickler was in a relationship with Nashville Predators player Jordin Tootoo, but the relationship did not last. In 2008, she became a vegetarian and was awarded the title World’s Sexiest Vegetarian by PETA. In 2010, she became engaged with songwriter Kyle Jacobs, after two years of dating. The two starred in a reality show for CMT I Love Kelly Pickler, which aired in 2015.