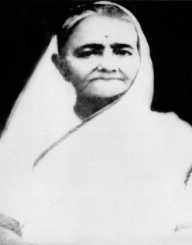 Kasturba Gandhi inspired many in the fight for independence and was the pillar behind Mahatma Gandhi, her husband, the man who revolutionized the freedom struggle with his ideology of non- violence. She was also known as Ba by many of her supporters. As a devoted wife, caring mother and fierce activist, Kasturba Gandhi was a force to be reckoned with.

Daughter of Gokuldas Mahanji, a wealthy merchant, and Vrajkunwerba Kapadia, Kasturba Mahanji was born on April 11, 1869, in Porbandar.

Being good friends with Karamchand Gandhi, her father arranged her marriage with Mohandas Gandhi. She was engaged at the age of 7 and married at 14. In May 1883, the young couple was married. Their marriage evolved from friendship and games to a mature relationship.

She was taught to read and write by her husband after their marriage.

Kasturba Gandhi’s political career began in South Africa when she got involved in the political activism in the Phoenix settlement near Durban in the year 1904. She remained there till 1914, taking part in the protests. During a rally in 1913 against the working conditions of Indians in that region, she was arrested.

Kasturba Gandhi returned to India in 1914 with her husband and participated in the various protests organized by him. As her husband became the prominent leader, she was by his side during the numerous protests. She even took his place during his stints in prison. She was respectfully addressed as Ba by the people.

Kasturba Gandhi was first arrested in 1913 during a protest against the condition of immigrant Indians in South Africa and was sentenced to three months in hard labor prison.

She was arrested several times in India due to her participation in the various civil disobedience marches and campaigns.

In 1942, Kasturba along with her husband and others participating in the Quit India Movement were arrested. She was held in the Aga Khan Palace in Pune.

Kasturba Gandhi focused on improving the welfare of women in Champaran, Bihar in 1917. She taught women about hygiene and health. She helped them to become literate.

Her involvement in the freedom struggle motivated many women to participate in the movement.

Kasturba was married as a 14-year-old child in the year 1883, and her son Harilal was born in 1888. She was a year older than her husband, Mahatma Gandhi. She stayed back in India to raise him when her husband went to London to study. She had a son before Harilal who died at a very young age. Her son Manilal was born in 1892 and Ramdas in 1897. She gave birth to her fourth son Devdas in 1900 after she joined her husband in South Africa.

Kasturba Gandhi suffered from chronic bronchitis which was a result of complications that arose during her birth. Pneumonia further complicated the condition.

In January 1944, Kasturba Gandhi suffered from two heart attacks after which she was confined to her bed. Despite her illness, she remained an active support for her husband.

On 22 February 1944, when she was 74 years old, Kasturba Gandhi died in the arms of her husband in a detention camp in Pune where they were imprisoned after the Quit India Movement.