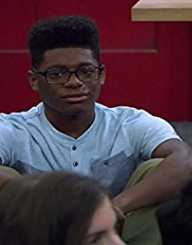 Actor Kamil McFadden was born in Atlanta, Georgia on 10 September 1996.

Kamil McFadden was schooled at home by Jinoki Ahmed, and this included studying American history in relation to Black Americans. They were taught about the Montgomery Bus Boycott and other historic milestones. One of the tasks the teacher set was to get the children to reenact historical events.

Kimario McFadden, the professional football player, is Kamil McFadden’s brother. He has commented that she feels like a real life sister to him. Kamil McFadden uses social media. His Instagram account has 150,000 followers, and he posts regularly. His Twitter account @Kevin_Mcfadden is verified, he has 10,000 followers.

Kamil McFadden ambition is to have his own television show.

He showed an early interest in acting. By the age of six, he was auditioning for the Youth Ensemble in Atlanta. When he turned eight, he joined a professional theatre company, Youth Ensemble of Atlanta and enhanced his acting, dancing and singing skills. Kamil McFadden went on a short tour of China with the Youth Ensemble of Atlanta. He did a lot of theatres including Holiday Urban Soup, Jeremy, and The Lie. His television work includes Fried Dynamite, House of Payne and Daily Wedgies. Films he has appeared include Trammel, Peacock Feathered Blue and An Evening with Andre Young.

Kamil McFadden came to public attention playing Ernie Cooper in the series K.C. Undercover aired on the Disney Channel. Set in Washington, D.C. The series centers around a high school math genius. He plays the role of her brother Ernie. The series debuted on the Disney Channel in January 2015. Corinne Marshall created the series and Kamil McFadden stars in it along with Zendaya, Veronica Dunne, Tammy Townsend, Kadeem Hardison and Trinitee Stokes.

Ernie Cooper, Kamil McFadden’s character, is a computer genius with an inferiority complex.

Kamil McFadden’s brother is a professional football player, and McFadden is a fan of the Tampa Bay Buccaneers. He is also a fan of basketball and supports the Cleveland Cavaliers.

He is a keen amateur photographer and admires the work of Kevin Durant.

Kamil McFadden is a vocal supporter of the Melanin Movement and often uses the hashtag on Twitter. This movement is all about empowering people and cultural acceptance.