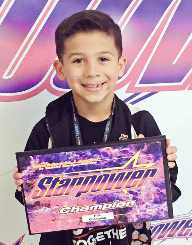 JT Church is jazz and contemporary dancer born at the beginning of 2006. He is also a famous Social Media Personality.  He auditioned in the 13th season of So You Think You Can Dance which made him quite renowned globally. The young dancer wasted no time ascending to stardom. He was born a dancer. He was only five when he started dancing. Dancing comes out all naturally to him. Dancing schools are rare in Virginia his birthplace, so he practices his skills at home.

JT Church has not been set back by this short-coming. His determination enough proved to his parents that he was a talented dancer. They, therefore, sent him to Gainesville Dance Center. The center is quite prominent but quite expensive. The social media has been a great platform for his fame. He wastes no time in using the opportunities that Facebook, YouTube, and Twitter offer among other social platforms.

JT Church was born on January 17th, 2006. He is the son of John Church and Leslie Church. His parents deeply care about him hence he had a pretty exciting childhood. John and Leslie are both in the realty business. He has an older brother known as Bradley who is a skateboarder.

He joined Gainesville Dance Center situated in Virginia where he learned dancing skills. The institute was among the best and largest dancing centers in the US though very expensive as well. He, therefore, had the best foundation in his dancing career.

JT Church was among the participants of NUVO Mini Male Breakout Artist in the states. The show has a large number of viewers. He won the dance competition. This was just but one platform that JT Church acquired his fame. However, the climax of his fame was at the 2016 successful audition to So You Think You Can Dance. This was the 13th season of the TV reality show. Nine other dancers were also selected to join the show along with him.

During the show, he paired with Robert Roldan. Roldan was also a skilled and famous dancer. Throughout the show, JT Church never held back any skills that he had. He gave it all in all his performances. Sadly, he missed the first position at the finals of the show. He emerged the first runners-up. However, he was already among young top talented dancers in America. He still has many great dancing opportunities awaiting him. He has proved that indeed he is something where dancing is concerned.

To JT Church, age is never a setback to him. He not only competes with kids his age but also with older kids. This is among his special features. He is also a quick learner. He has learned some of the dances thought to be quite difficult for someone his age. He has never been involved in any controversial activities. Sources have it that he has good relations with other dancers as exhibited during his TV dance competitions.

JT Church has proved to be a philanthropist at a young age shown by his keen interest in charitable events. In 2014, he was among the participants of the 20th Annual Dancing for a Cure. This is an event that was organized for the good of breast cancer patients. A huge amount of money was raised at the event to help fund for patients with breast cancer.