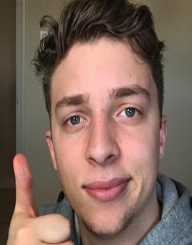 Josh Temple is a famous YouTube Gamer who has caused heads to turn with his impressive gaming videos and his fan base growing daily. With over 3 million subscribers on his official YouTube channel ‘slogoman, facebook’ Josh boasts of 454 thousand followers on Instagram, about 140 thousand fans on Twitter and over 86 thousand followerFacebookpage.

Josh Temple was born on May 16, 1997, in England, United Kingdom. Equally, he is known as the slogan. He has one sibling, his sister Amelia who is younger than him and is a famous Instagram star. In his education career, he studied Psychology in college.

Additionally, Temple was very interested in sports. He tried his hand at several games, but rugby ended up being his best. However, fate had different plans for him, and Josh Temple gave up his love for sports to built a career on YouTube. He began a full-time business on his YouTube channel as an entrepreneur.

He commenced his gaming career at the age of 17 on 4th August of 2013. In his career beginnings, he posted videos only with GTA game plays.With time, he accumulated a dedicated fan following. He embarked on uploading videos about other games too. His fantastic rapport with the fans speaks a lot about his demand in the market.

Josh Temple has been on the market for three years but has been able to gather many subscribers in the social media by posting a couple of his real-life videos. This method attracts the fans to keep revisiting his channel.

His fame has increased to the level where he has worked with other famous You Tubers like Jordi Van De Bussche.

Josh Temple loves dogs and owns two; Poppy and Lily. His happiness is brought about by the small things in life, traveling around the world and learning about cultures. It was featured when he toured with Jordi Van De Bussche to Switzerland in October 2015.