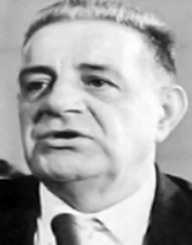 Joseph Valachi was a member of the Genovese family, from the1930s until he was convicted and jailed in 1959. Mafia boss Vito Genovese suspected Valachi of having become an informer and took a contract out on his life. Genovese’s information was incorrect, Valachi was had no turned information. But, incarcerated in Atlanta Federal Penitentiary, he heard about the contact and became suspicious of a fellow inmate, John Saupp. He subsequently attacked Saupp and killed him, although it was later discovered that Saupp had no Mafia connections.

Joseph Valachi was charged with the murder of Saupp and in his rage, broke the Mafia code and turned informer (1962). He provided the names of Mafia families and bosses in the United States, the murders he had been involved in and who had ordered them. Eventually, many of the Mafia bosses were identified, convicted and imprisoned. Although his information was a breakthrough in identifying an organisation that had existed for 70 years in the United States, it was somewhat limited because of his minor ranking in the Mafia.

Joseph Valachi was the first in the history of the American mafia to break the code of silence and forced the FBI Director Hoover to admit that a mob existed in America and that it had originated in Italy. For many years the authorities had denied that a Mafia was operating in North America.

Joseph Valachi married Mildred Reina on the 18 September 1932, and they had one child. He died in the La Tuna Federal Correctional Institution, Texas on the 3 April 1971.