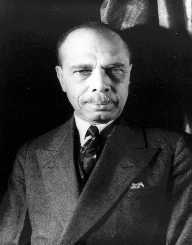 James Weldon Johnson was born on June 17, 1871, in Jacksonville, Florida. His brother John Rosamond became a composer. His mother was a musician and a teacher at a public school and started educating her sons. He later attended the Edwin M. Stanton School. Johnson went on to study at the Clark Atlanta University, which he graduated in 1894.

After graduation, Johnson went to Jacksonville to work as a teacher, but later he and his brother moved to New York City, joining the Great Migration out of the South. They were writing songs together and in the early 1900s achieved some success on Broadway.

James Weldon Johnson made his career in public service, education, diplomacy and civil rights activism. His career began in 1904 when he successfully participated in Theodore Roosevelt’s presidential campaign. Roosevelt appointed Johnson as United States consul in Venezuela, from 1906 until 1908, and the following year until 1913- to Nicaragua.
After returning from Nicaragua, Johnson got involved with the Harlem Renaissance- the flourishing of art and writing in the black community. He became the leading voice of the movement.


Career In Education And Law

After finishing university, James Weldon Johnson went back to Jacksonville and started to work at Stanton as a teacher. In 1906, he was promoted the principal of the African-American school. During this time, he was paid less than a half of what his white colleagues earned. During his time, he improved black education by adding nine and tenth grade.

During the time James Weldon Johnson was a teacher, he was also studying law and preparing to pass the bar. He was the first African American who was admitted to the Florida Bar Exam in 1897, since the Reconstruction era. One of the examiners didn’t want a black man to be admitted and left the examination room. His background of law helped Johnson at his work as a civil rights activist.

When James Weldon Johnson moved to New York City with his brother, both started to work in a musical theater. For most of the time, Johnson wrote lyrics, while his brother- music. One of their best-known songs is “Lift Ev’ry Voice and Sing,” which went on to become the “Negro National Anthem.”

The brothers had some success on the Broadway. They collaborated with director Bob Cole. Johnson also worked on the opera Tolosa that satirized the U.S. annexation of the Pacific islands. His success on Broadway ensured Johnson's recognition in the upper African-American society in Manhattan and Brooklyn.

James Weldon Johnson became known as an inspirational and influential speaker during his time at Atlanta University. In 1892 he won the Quiz Club Contest in English Composition and Oratory. He was also the founder and editor of the Daily American in 1895. The newspaper covered political as well as racial topics, especially during the time of Jim Crow’s attempts at imposing racial segregation.

In 1904, James Weldon Johnson joined the Colored Republican Club, but the following year became the president of the club. In 1914, Johnson became the editor of New York Age- influential African-American newspapers on racial topics.

In 1916, James Weldon Johnson became the member and field secretary of the National Association for the Advancement of Colored People (NAACP). Johnson engaged the organization in mass demonstrations, opposing the race riots and frequent lynching in the South. One of the biggest parades with more than 10,000 participants was in 1917 on New York’s Fifth Avenue. He was also the organizer of peaceful protests against the white racial violence against blacks. The series of protests in 1919 was a response to the Red Summer- a term used to describe series of deaths due to race riots.

Johnson became the first black executive secretary of the NAACP in 1920. He served in his position until 1930. During this time, Johnson worked on lobbying for the Dyer Anti-Lynching Bill and promotion of Harlem Renaissance.

After leaving his posts as the executive secretary of NAACP, James Weldon Johnson returned to his work as a teacher. He became the Spence Chair of Creative Literature at Fisk University in Nashville. The position was specially created for him, in recognition of his achievements. In 1934, he was appointed as the first African-American professor at New York University.

Johnson died in 1938 when he was 67 years old. He and his wife were on vacation in Wiscasset, Maine, when the car his wife was driving was hit by a train. His funeral took place in Harlem and was attended by more than 2000 people.