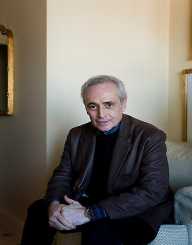 Josep Maria Carreras I Coll is a Spanish Tenor known to the world as José Carreras. He has been making music on the operatic stage since he was 11 years old. He was born on December 5, 1946, just after the Spanish Civil War. This would have an impact on his early life, but his tenacity would see him through many battles, including acute lymphoblastic leukemia. The general public knows him best from his participation in The Three Tenors, along with Luciano Pavarotti and Plácido Domingo.

Carreras was born in Barcelona, Spain. His father had been a French teacher, but he was reduced to acting as traffic police when Carreras was a child. This was because father fought on the Republic side and lost in the Civil War. His mother operated a modest hair salon. Carreras’ father wanted him to find a “fall back” job in case opera did not work out, his mother supported his dream. Carreras’ grandfather was a baritone, so singing was in his blood. When Carreras was six years old, he had a life-changing experience when he saw the film, The Great Caruso. Right after the experience, he began singing arias from the film. He did so nonstop. This did not please his family, but it did inspire his mother to find someone to give him lessons. When he was eight years old, he performed for Spanish Public Radio. When he was eleven, he made his stage debut in El retablo de Maese Pedro.

He played a few roles as a boy soprano on stage, but at the age of 18, Carreras matured into a young tenor. It didn’t take long for him to garner notice. He studied with a few people, but he considered Juan Raux the most important artistic influence of his early years. Then came a pivotal role that would improve Carreras’ career. He was to play a minor role in Norma at the Liceo Flavio. This is where the great Montserrat Caballe discovered him. She then requested Carreras to play a lead role in Lucrezia Borgia with her. She appeared in fifteen more operas with him. Her brother became Carreras’ manager well into the 1990’s. Accolades and roles poured in from that time forward.

In the 1970’s and into the 1980’s, Carreras sang with the most notable mezzo-sopranos and sopranos at the time, such as Dame Kiri Te Kawana, Agnes Baltsa, and Brigit Nilsson. Two composers suited his voice perfectly were Verdi and Puccini. He focused mainly on their operas for quite some time. In the 1980’s, however, he attempted to broaden his repertoire by including operas such as Carmen and Aida. Some argue that this decision affected his voice, and not for the better. In 1987, while filming La bohème, Carreras collapsed. He was later diagnosed with acute lymphoblastic leukemia and given a 10% survival rate. Amazingly, he survived.

In 1990, Carreras, Domingo, and Pavarotti performed together for the first time as the “Three Tenors.” This event happened for a few reasons. First, Carreras had beaten an aggressive form of cancer not long before, and they used this event to welcome him back to the world stage. Second, Carreras started a leukemia foundation, and this was a fundraiser to get it off the ground. Third, it opened the world of opera to a wider audience. Their reception exceeded everyone’s expectations. By 1994, their televised concert in Los Angeles pulled a worldwide audience of approximately one billion viewers.

Jose Carreras married Mercedes Pérez in 1971, just as his career took off. They had a son named Albert and a daughter named Julia. In the beginning, things were fairly simple, but a woman named Jutta Jäger entered Carreras’ life while he was still married. He divorced his first wife in 1992 but waited until 2006 to marry Jäger. He and Jäger separated in 2011.