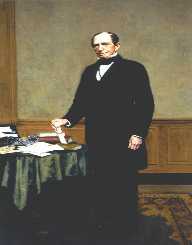 Johns Hopkins was born in the 18th century to Quaker parents. His father, who was a tobacco planter, liberated his slaves in line with their Quaker beliefs. This action was when the abolitionist association increased in popularity in America. Johns was taken out of school at the age of twelve to assist his parents on the farm. It was here that he developed the values of hard work and honesty. Having been exposed at a young age, he grew up to be a principled, disciplined and strong-minded young man.

As a teenager, he started assisting his uncle with his wholesale grocery business, and it was there that he discovered that he was gifted with excellent business skills. While working at his uncles business, Johns fell in love with his cousin. He was, however, unable to tie the knot with her because of social and religious restraints.

To deal with the heartbreak, Johns Hopkins immersed himself in his work. Due to this fact, he acquired a lot of wealth, some of which he gave back to the society due to his kind-hearted nature. Therefore, he left considerable bequests in his will to create both the Johns Hopkins University and Johns Hopkins Hospital.

His Childhood and Early Life

On the 19th of May, 1795, Johns Hopkins was born. His parents were Samuel Hopkins and Hannah Jenney. They lived in Anne Arundel County, Maryland, United States. John acquired his name after his grandfather whose name was Johns Hopkins. His family members were part of the Society of Friends also known as the Quakers. His family possessed an expansive plantation because his father was a tobacco farmer. They also had numerous slaves.

The Quakers association actively took part in the movement which was the abolitionist movement. It had begun gaining popularity in the USA in the year in 1807. According to the Quakers beliefs, John's family had to free some of their slaves who were healthy and robust leaving behind the ones who were unhealthy or weak to care for them.

The setting free of some of the slaves especially the healthy ones meant that they would be left with few people to work on their large plantations. For a few number of years, John most probably attended The Free School of Anne Arundel County located in Maryland.

Johns Hopkins left his father’s plantation to go and labour at his uncles’-Gerard Hopkins- wholesale grocery business in Baltimore. John was a quick learner, and he also proved to be physically skilled and smart to carry out business. While staying at his uncle’s house, he started falling over heel for his cousin to the point of proposing marriage to her. His uncle, however, refused to let his daughter get married to Johns. Also, a passionate affiliation or even marriage involving first cousins was a prohibited in the Quaker society.

Money had become scarce, and some clients to the grocery business proposed payment for goods with terms of liquor instead of cash. Johns was in support of this proposal, but his uncle was against it. The two had a bitter dissimilarity which led to Johns leaving his uncle’s business in the late 1810s,

Johns Hopkins partnered up with a fellow associate of the Quakers, Benjamin Moore and they set up a business after he left his uncle’s business. The business was at first successful; however, it came to an end after Johns and Benjamin disagreed.Consecrated with good judgment in the business sense, it did not take time before Johns established his company Hopkins & Brothers Wholesalers together with his three brothers in 1819. Under his administration, the business prospered, and with no time, they were retailing a variety of commodities in the Shenandoah Valley from Conestoga trucks.

Johns Hopkins went on to invest the profits from their flourishing business in some enterprises which included the Baltimore and Ohio Railroad (B&O) which fortunately gained significant capital. He was very triumphant being a businessman that enabled him to retire in 1847 at the age of 52.

Later on, in 1847, he started administering to the Baltimore and Ohio Railroad (B&O) and chairman of the Finance Committee in 1855.Johns was made the president of the Merchants National Bank of Baltimore and was an administrator in several banks.

Remarkably, Johns Hopkins was a successful entrepreneur and a philanthropist. He is well-known for donating massive quantities of his riches to establish two establishments that were to bear his name: "Johns Hopkins University" and "The Johns Hopkins Hospital." Up until that time, his contribution of $7 million was the most significant generous donation in the history of the USA.

Johns Hopkins was one man who had believed in giving back to the society. After the end of the Civil War, outbreaks of yellow fever and cholera destroyed several cities in the United States which led to the killing of hundreds of people. All through this point in time, Johns become conscious of the current need for efficient medical amenities in the area.

Additionally, he was also a renowned abolitionist, and he was entirely devoted to the cause. He worked for hand in hand with fellow America’s who were even well-known abolitionists namely Myrtilla Miner and Henry Ward Beecher.  Before the Civil War,   they took part in an influential role in putting into practice President Lincoln's liberation dream in the post-war era.

Johns Hopkins wrote a will in which he donated $7 million for the amalgamation of a free hospital and an associate medical and nurse's training colleges. Additionally, the donation included an orphanage for children of color and a university in 1870.

Having acquired a lot of wealth over the years, Johns Hopkins was placed 69th in "The100 top Wealthy" which was a rating of the Richest Americans from Benjamin Franklin to Bill Gates in 1996.

Johns Hopkins had fallen deeply in love with his uncle’s daughter, Elizabeth, and as a young man, he wanted to marry her.However, the two were not allowed to marry because matrimony between cousins was as forbidden in the Quaker movement. Due to this fact, the two decided not to marry anyone else and made a pact to become friends for life. Johns Hopkins passed away on the 24th of December 1873, in Baltimore, Maryland, United States. He was 78 years.