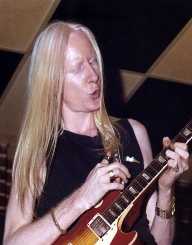 John Dawson Winter III was born 23rd February 1944, in Beaumont, Texas, in the United States. Both Winter and his younger brother, Edgar, were encouraged by their parents from a young age to pursue their musical talents, and both boys were also born albinos.

Johnny Winter was 15 when he and his band, Johnny and the Jammers, released their debut single, School Day Blues, on a record label in Houston.

In 1967, Winter recorded a single, Tramp, with the Traits, and then in 1968, he released his debut album, The Progressive Blues Experiment.

In 1968, Johnny Winter had his big break. A performer by the name of Mike Bloomfield, whom Winter had met previously and done a jam session with, asked Winter to perform a song during his concert in New York City. Bloomfield was signed to Columbia Records who had representatives at the concert, and within a week they had Winter signed to their record label.

His first album with Columbia was Johnny Winter, released in 1969. One of the musicians on his album was younger brother Edgar. Winter and his group played at several rock festivals that year, including Woodstock, and in late 1969, recorded another album.

Edgar left the trio and formed his group in 1970. After his departure, Winter formed a new band called, Johnny Winter And. Their name was also the name of their first album. Shortly after forming the group, Winter formed a heroin addiction. To his credit, he sought treatment, and by 1973, he was back performing again.

As a child, Johnny Winter dreamed of performing with Muddy Waters, a blues guitarist. In 1974, Winter was part of a group of musicians that came together to honor Waters with a concert. In 1977, Winter then recorded with Waters.

In 1996, Winter and his brother sued DC Comics as there were two characters, Johnny and Edgar Autumn in the Jonah Hex: Riders of the Worm and Such series, which the brothers believed portrayed them in a very negative way. They lost the suit, as the court sided with DC Comics.

Johnny Winter continued to record with several labels, and he continued to perform live throughout America and Europe. He played at many festivals including the New Orleans Jazz & Heritage Festival, and the Chicago Blues Festival.

Johnny Winter was found dead in his hotel room on 16th July 2014. He had performed two days earlier. The official cause of death was not released, but unofficially it was said to be emphysema and pneumonia.

Among his awards and honors, Winter has the following:

2015:   Posthumously awarded the B.B. King International Artist of the Year Award at

In 1992, Johnny Winter married Susan Warford. They were still together at the time of his death.