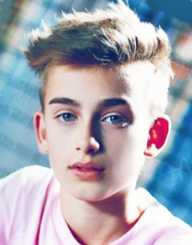 Johnny Orlando was born on January 24, 2003, in Ontario, Canada. He was born to Dale Orlando and Meredith Orlando. He was brought up alongside three siblings, Darian, Madison, and Lauren. He is a Canadian social media personality, Vlogger, and singer. He is fourteen years old and a star in the making. He has a vlog channel known as ‘Johnny Logs.’ He also has a YouTube channel titled ‘JohnnyOsings.’ He started his singing career at the age of eight, and he has never stopped since.

Johnny Orlando began singing with his older sister, Darian. Darian became an excellent role model to her brother, and her brother has taken his singing career seriously since he started. In his videos, he covers songs that have been sung by singers such as Justin Bieber and Rihanna among other singers. He also made videos of original songs that he sang such as ‘Summertime,’ ‘Never Give Up’ and ‘Found my Girl’ among other songs. He has also appeared in many commercials.

Johnny Orlando started his career at a very early age of eight. He started uploading his videos on YouTube in 2011. Since 2011 he has received a lot of success and popularity by garnering more than one million subscribers to his channel by 2016. He initially uploaded a video that was a cover for the forty topmost pop songs. The videos got him a huge fan base which comprised of teenagers and youths who loved listening to his music. He has however moved away from making cover videos and started producing albums that contained his original songs.

In 2015, Johnny Orlando released his debut EP titled ‘VXIIXI.’ In 2016, he released his single ‘Let Go’ which was a hit worldwide. It was also among the top songs on the iTunes chart for pop music. He has also appeared in a short film titled ‘Fading Light.’ He has lent his voice in films such as ‘Spaced’ and ‘Wishenproof.’ He has been a nominee for the ‘Teen Choice Award 2016’ as the ‘Choice Web Star: Music.’ He is still young, but he has already made a name for himself in the music industry and hence destined for greatness.

Johnny Orlando has already achieved a career for himself even though he is still young. He is a popular YouTube sensation who is loved and viewed by many. He is very famous and popular for doing voice over songs of famous musicians such as Rihanna, Drake and Justin Bieber among other musicians. He has achieved greatness at a young age which has set him apart from other celebrities that have come and gone.

Johnny Orlando has only been involved in one controversy in which people claimed that he was dating Mackenzie Ziegler of ‘Dance Moms’ fame. He has not commented on the said rumor but has continued to work on his music and acting career. He is determined to make it in his career and become a well known and established celebrity.

Johnny Orlando grew up in a middle class family. He loves hanging out with his friends and family. He was interested in sports and music from a very young age. He began his music career when he and his sister Darian posted a video cover on YouTube of Justin Bieber’s song ‘Mistletoe.’ The video was a hit, and it drew young fans to him and his sister. The video got more than two thousand views in a week.

Johnny has over one million subscribers on YouTube and also more than a million followers on Instagram. He has an estimated net worth of $500, 000 at his age presently. His sister Lauren is also a You Tuber, and Johnny often appears in her videos. Johnny has a great drive to achieve greatness, and hence he is working hard to make his career great.