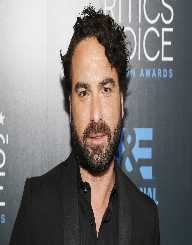 American actor John Mark Galecki was born on April 30, 1975, in Bree, Belgium. His parents were Americans, living in Belgium at the time. His mother worked as a mortgage consultant, and his father was a member of the U.S. Air Force. He also has a younger brother and sister. After returning from Belgium to the United States, the family settled in Oak Park, Illinois.

As a child, Johnny Galecki was always very creative and made up long stories and tales. Since he was talking a lot, his mother made him play the game “quiet time” to see how long he can go without talking. He has described his mother as tough but loving.

Johnny Galecki was interested in the film business from an early age. His acting debut was on 1987 when he starred in the CBS miniseries Murder Ordained. In 1989, he portrayed Rusy Griswold in National Lampoon’s Christmas Vacation. Galecki gained his popularity after appearing as David Healy in the sitcom Roseanne. After receiving recognition, Galecki was cast on the widely popular I Know What You Did Last Summer movie.

Galecki continued his movie career with various projects. In 1997, he starred in the film Suicide Kings. Later that year, he also starred in the high-profile film Bean and 2001, played a minor role in the Vanilla Sky. Besides his movie projects, Galecki also starred in the TBS’s sitcom My Boys and sitcom Hope & Faith. He also performed on Broadway in the play The Little Dog Laughed as a prostitute called Alex. The play ran in 2006 and 2007. He originated the role at Second Stage Theater, but it became popular and was moved to the Cort Theatre. For his performance, he won the 2007 Theater World Award.

One of the biggest and longest standing roles of Johnny Galecki is as Leonard Hofstadter in the CBS sitcom The Big Bang Theory. The show debuted in 2007 and is still running. The show also has used Galecki’s talent and skills as a cellist. For this role, all three main actors- Galecki, Kaley Cuoco, and Jim Parsons received $325,000 per episode, but as of 2014, their salary was raised to $1 million per episode.

Johnny Galecki dated him The Big Bang Theory Kaley Cuoco from the beginning of the show until 2009. At the time, the two also played a couple on the show. After the split, Cuoco announced that they are on good terms after the break-up. In 2012, rumors arose that he is dating actress Kelli Garner. The couple dated for two years until 2014, but then separated, remaining friends.

Galecki is a dedicated vegetarian. He owns a 360 acre land in Santa Margarita, California. His property includes vineyards.