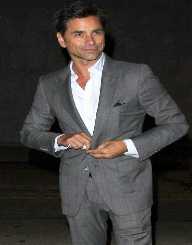 John Stamos was born on August 19th, in 1963. He is a famous American actor and a musician. His early recognition came with his role in 1984 General Hospital as Blackie Parrish. His role in the medical drama also got him to be one of the Emmy awards nominees. He also starred in Dreams as Gino Minnelli. After this, he plunged into the film industry making his debut with the low budget film Never Too Young to Die in 1986. In 1987, he was featured in the highly acclaimed American sitcom Full House as Jesse Katsopolis. His role here also got him nationwide recognition.

John Phillip Stamos was born on August 19th, 1963. His place of birth was in Anaheim, CA. He is the eldest son of Bill and Loretta. His father Bill worked as a restaurateur and was from the Greek descent. The surname for the family was Stamotopoulos before his father later changed it to Stamos. John Stamos has two other siblings called Alana and Janeen.

When Stamos was still young, he had to work in the family business. This partly influenced the jobs that he took when he was in his early teens. He worked in several restaurants to earn a living. He pursued his early education at John F. Kennedy High School. He was a member of the marching band where he played as a drummer. Sooner or later, Stamos developed a special interest in acting. The advantage that he had was that his parents fully supported his acting ambitions. His father was in for the idea that he should try out his luck in acting before joining college.

Surprisingly, Stamos became a cast in General Hospital, an ABC soap opera. His character gave him a string of followers that loved him for the twist he gave the show.

With his exceptional performance on General Hospital, Stamos landed another lead role in CBS sitcom Dreams-1984. With the help of the fame that Stamos had acquired, he joined The Beach Boys. The band gave him an opportunity of playing as a drummer for them during one of their performances in Washington D.C. Over 1.5 million people well attended this performance as their audience. This also gave a boost to Stamos already rising popularity. The Beach Boys found his talent as worth taking advantage of in their band, and they invited him to play on special occasions.

After working with The Beach Boys, Stamos landed his debut role in the film industry. He was to feature in Never Too Young To Die¬- 1986. Sadly, the film did not perform well as it was regarded as a low budget film. He again played another TV role in You Again?-1986 to 1987. After You Again? A sitcom came to an end in 1987; he landed a major role in another sitcom by ABC called Full House. His role as Jesse Katsopolis gave Stamos a huge boost in his acting career. The American comedy ran for eight successful seasons making Stamos a household name over the years. It came to an end in 1995.

After playing the lead role in Full House which ran for 192 episodes, Stamos had a difficulty separating himself from a character that he had been used to. Nonetheless, there are several TV shows that he has featured in since then including A Match Made in Heaven- 1997, Friends- 2003, Glee- 2010 to 2011, Two and a Half Men, Necessary Roughness- 2013, Grandfathered- 2015 to 2016 and Fuller House- 2016.

John  Stamos tied the knot with Rebecca Romijn in 1998. Their relationship, however, came to an end in 2005.