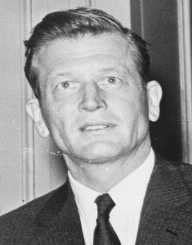 John  Lindsay was born on November 24, 1921, in New York to George Nelson Lindsay and Florence Eleanor Vliet. Born to a family of English and Dutch descent, his father George was a successful lawyer and investment banker. He was educated at the Buckley School before attending the St Paul’s School. In 1944, John  Lindsay enrolled at Yale University, where he joined the Scroll and Key. During the World War II, John  Lindsay was drafted to the United States Army as a gunnery officer. During his service, John  Lindsay gained five battle stars and attained the rank of lieutenant. John  Lindsay briefly worked as a ski bum and also trained as a bank clerk after the war. John  Lindsay then returned to New Haven to continue his education at Yale School of Law and graduated in 1948.

John  Lindsay was admitted to the bar in 1949 and started his law practice with the law firm, Webster Sheffield, Fleischmann and Hitchcock & Chrystie.

In 1952, John Lindsay made the first move towards politics as a co-founder of Eisenhower club. In 1952, he was appointed the president of the New York Young Republican Club. In 1955, John  Lindsay worked as an executive assistant to Attorney General Herbert Brownell at the United States Department of Justice. This was when he started to be involved in civil right cases as he worked on civil liberties cases and the 1957 Civil Rights Act. In 1958, John  Lindsay managed to win the Republican slot for Silk Stocking district, Manhattan’s Upper East Side with support from John Aspinwall Roosevelt, Herbert Brownell, Mrs. Wendell Willkie and Bruce Barton.

John  Lindsay was able to win the seat and made it to Congress. In Congress, John  Lindsay took a more liberal posture on issues. John  Lindsay supported policies like federal aid to education and Medicare, the establishment of a National Foundation for the Arts and Humanities and a federal United States Department of Housing and Urban Development.

John  Lindsay contested as a Republican candidate and with the support of the Liberty Party of New York was elected as the Mayor of the New York City in 1965. The contest was a three-way affair between the Democratic candidate Abraham D. Beame, the City Controller and the Conservative candidate, William F. Buckley Jr, the founder of National Review magazine. John  Lindsay was greeted with a strike just on his first day at the office when the Transport Workers Union closed the New York City subways and buses for 12 days. This was just the first of other impending labor relations riots. To end this strike, there was a 15 percent pay rise for transit workers, coupled with huge pension bonuses, which nearly put the city into bankruptcy. Just a year to the end of his first term of office in 1968, he was faced with another challenge after he tried to decentralize the New York school system.

John  Lindsay aimed at giving the communities more say in how school there are run and started with three schools. The teachers union rather saw the move will limit its powers and also had to deal with individual schools instead of a more centralized one. This resulted in a strike after three teachers were dismissed in the Ocean Hill-Brownsville district. The strike, which started in May that year, lasted until November. In 1969, John  Lindsay failed to gain the Republican nomination to seek re-election and therefore contested on the ticket of the New York Liberal Party.

John  Lindsay won the election handsomely with over 80,000 more votes over the Democratic candidate than he had in 1965. John  Lindsay second term was also faced with some challenges, and even though he gained some successes within this period, a poll by Gallup showed New Yorkers believed he had done a poor job. With this assessment, he did not contest for a third term in office and returned to his law practice broadcasting work.

John  Lindsay with his wife switched political party by leaving the Republican Party to join the Democratic Party in 1971. John  Lindsay back his decision, he stated that "In a sense, this step recognizes the failure of 20 years of progressive Republican politics. In another sense, it represents the renewed decision to fight for new national leadership."After the switch, John  Lindsay unsuccessfully tried bid for the presidential ticket of the Democrats during the 1972 Democratic presidential nomination. John  Lindsay then tried to seek the party’s Senator nomination for New York in 1980 but had 17 percent of the votes.

John  Lindsay returned to his law profession and served as a guest host for Good Morning America on ABC. In 1975, he tried to venture into acting with a role in Otto Preminger’s Rosebud. John  Lindsay released his novel, The Edge, in 1976. Lindsay served on the board of the Association for Better New York and also as the chairman of the Lincoln Centre Theatre. In 1996, John  Lindsay was appointed to two ceremonial posts by the then New York City Mayor, Rudolph W. Giuliani to enable him to qualify for health insurance. This was in his bid to help Lindsay acquire health insurance since his medical bills on his health problem, including stroke, Parkinson’s disease and heart attack have depleted his finances. Lindsay was seven years short of qualifying for city pension due to eight-year service as a mayor.

John Lindsay was married to Mary Anne Harrison in 1949. The two met at the wedding of Nancy Bush where John acted as an usher and Mary as a bridesmaid. The couple had four children. Lindsay died on December 19, 2000, of Parkinson disease in Hilton, South Carolina. He has suffered a stroke in 1993, which saw his health decline. Mary also died of cancer four years after his husband.

The Lindsay Triangle, a park in Brooklyn is in his honor, East River Park named in his honor so as the South Loop Drive in Manhattan’s Central Park was renamed after him. A fellowship program in Yale Law School was named after him in 2000.