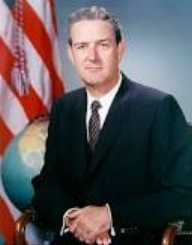 John Bowden Conally Jr. was born on February 27, 1917. He was an American politician. John was Governor Number thirty-nine of Texas. He was also the 61st United States Secretary of the Treasury. He was a Democrat at the beginning of his career. In 1973, he joined the Republican Party. He died on June 15, 1993, at the age of seventy-six.

John attended Floresville High School. He joined the University of Texas in Austin. At the school, he was a member of the Friar Society. He was also the President of the student body. After graduating from college, he joined the University Of Texas School Of Law. John got his admission to the bar via examination.

After his admission to the bar, John Connally joined the United States Navy during the Second World War. He started his service as an aide to James V. Forrestal. He later became a member of staff for General Dwight D. Eisenhower. John later became a fighter plane director aboard carrier USS Essex.

John Connelly received the Bronze Star for bravery and the Legion of Merit. In 1946, he was discharged from the navy at the rank of Lieutenant Commander. He later practiced law at Alvin Wirtz law firm. He later became Baines Johnson’s aide in Washington DC.

In 1961, John Connally became the Secretary of the Navy. He was named by President John F. Kennedy. However, he resigned eleven months later to run for the post of Governor of Texas. He ran for the post as a conservative democrat.

In 1963, he was elected as the Governor of Texas, a post he held up to 1969. As governor, he signed into law the establishment of the Texas Higher Education Coordinating Board which promoted higher education. He made a lot of changes in Texas while Governor.

In 1971, he became Secretary of Treasury at the behest of President Nixon. In 1972, he resigned for the post of secretary of the treasury and became the head of the Democrats for Nixon. The group was funded by the Republicans. John joined the Republican Party in May 1973.

The following year, John Connally was indicted for allegedly pocketing ten thousand dollars which he used to influence a milk price decision by lawyer Jake Jacobsen. He was later acquitted of all charges. John also ran for the presidency and failed. In 1986, John filed for bankruptcy after he lost most of his businesses in Houston.

In 1940, John Connally married Nellie Brill with whom he had four children. He died on June 15, 1993, of pulmonary fibrosis at the age of seventy-six. His wife Nellie Brill died in 2006.