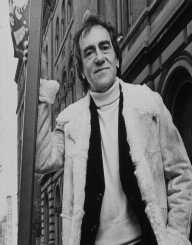 American theatrical director and television producer Joe Papp was born Joseph Papp on the 22 June 1921 in Brooklyn, New York to Samuel and Yetta Papirofsky. His home language was Yiddish, and he had a fairly impoverished childhood. Serving in the US Navy during World War II, he became interested in drama when he helped produce shows.

After his experience of staging shows during World War II, Papp studied at the Actors Laboratory in California, graduating in 1948.

Papp acquired the old Astor Library and in 1967 founded the New York Shakespeare Festival Public Theatre, developing a theatre complex consisting of six venues. He worked with emerging playwrights such as David Hare, Caryl Churchill, Thomas Babe, Wallace Shawn, and others. Musicals which debuted at the Public Theatre include A Chorus Line and Hair. Actors he worked with in the early stages of their careers include Kevin Kline and Meryl Streep.

He ran the Public Theatre for over 30 years and was involved in exposing students and the general public to the works of Shakespeare. He was also instrumental in promoting the work of African-American, Asian-Americans and Hispanics by using minority actors in major roles.

Three of his productions won Pulitzer Prizes: A Chorus Line; That Championship Season and No Place to Be Somebody. He also won over 20 Tony Awards.

He had three divorces before marrying Gail Merrifield in 1976, and they remained married until his death in on the 31 October 1991. He had five children: Miranda, Barbra, Tony, Susan, and Michael.