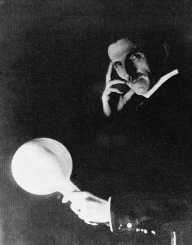 Nikola Tesla was born on July 10th, 1856. His place of birth was in an Australian Empire village called Smiljan- which is modern-day Croatia. During his first few years in the U.S., he partnered with Thomas Edison. Tesla was known for his expertise in mechanical engineering. He is to be credited for the invention of modern electric mortar, fluorescent illumination, and the Tesla coil which is mostly used in TV sets and radios. Tesla died at the age of 86.

The famed inventor, Nikola Tesla, was born on July 10th, in 1856. He had other four siblings named Dane, Milka, Angelina, and Marica. His father, Milutin Tesla served as an Orthodox priest while his mother DjukaMandic was simply an inventor of home appliances. It was from her mother’s experiences that Tesla acquired his inventive talents from. In spite of his father’s demands to the priesthood, Tesla followed his heart and ventured into sciences while pursuing his education.

Tesla undertook his studies in Realschule, Karlstadt; which is a polytechnic located in Graz and later enrolled for his higher education at the University of Prague. During this period, he moved to Budapest where he got employed to work at Central Telephone Exchange. His induction motor idea came to him while still residing in Budapest. Years later when Tesla was 28 years, he moved again to America.

Nikola Tesla made his arrival to the U.S in 1884. He had carried only his few clothes with him. The most important thing he had with him was a letter introducing him to Thomas Edison, who was a famous inventor during this time. Soon, the two were in business together making new inventions and improving on what Edison had earlier invented. Their relationship did not last long as they conflicted each other over their varying personalities.

Immediately after parting ways with Edison, Tesla quickly worked on patenting an arc lighting system probably one that he had invented with Edison. To do this, he liaised with Lemuel W. Serrell, a patent attorney who later introduced Tesla to investors that would help him establish Tesla Electric Light & Manufacturing in 1885. The same year, Tesla primarily worked on gaining patents to his works including the DC generator. The technical press soon noticed the advanced features of Tesla’s work more so after installing the new system on the New Jersey railway.

Things did not work out well in the coming years as the manufacturing industry was very competitive. This made Tesla run out of business and went to work in manual labor jobs that earned him approximately $2 per day.

After the hardships that he went through, things began to light up after George Westinghouse raised interests on Tesla’s AC invention. Westinghouse was an American and a successful businessman seeking to bring a change to the power system used in the nation. He sought to offer a long-distance power solution. With the mentality that Tesla’s invention would aid him to achieve his mission, he went ahead and purchased his patents for roughly $60, 000 in cash and other payments were made as stock in Westinghouse Corporation. Tesla’s inventions kept on coming with ‘Tesla Coil’ making a major difference. It set the foundation for wireless technologies and that the invention is still being used today in radio technologies.

After years of competing with Edison, Tesla previous patents bought by Westinghouse Corporation stood out, and the company was chosen to supply lighting at World's Columbian Exposition-1893. Tesla found this as an opportunity to demonstrate the functioning of his AC system. Two years down the line, he came up with an AC hydroelectric power system design that was used to power Buffalo’s city in 1896. His success in deploying his system not only gained recognition but it was also widely accepted as a standard system. It was the main system being used during the 20th century.

Nikola Tesla was a bachelor throughout his life as he was never married. His schedule was a busy one as he spent close to 15 hours on his projects. He only slept for a maximum of 2 hours. He had a poor social life as a result.

During the late stages of his life, Nikola Tesla suffered a nervous breakdown. The failure of some of his projects, later on, declared him bankrupt. He passed away on January 7th, 1943. He died at the age of 86 years.