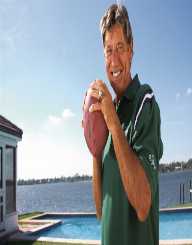 Joe Namath loved to play sports ever since he was a kid. When he was in elementary and high school, he could be found playing sports like baseball, basketball, and most importantly, football. He was so great at sports, even as a teenager, that Joe Namath was recruited to play football on his college team at the University of Alabama. After college (he left school, but did not graduate or earn a degree), many baseball teams tried to recruit him, but he held out until a football team wanted him.

Joe Namath is most famous for playing for the New York Jets’ football team. He joined the team as their quarterback in 1964. He put a lot of hard work into the sport, and he is even one of the reasons that the NFL (and AFL) is as great as it is today. He played in (and helped his team to win) the third ever Superbowl. In 1967, only a few years after joining the team, Joe Namath made a record for quarterbacks everywhere, throwing a football over 4,000 yards in one season. Only two years after that, he was awarded the title of MVP. His amazing football skills and easy-going personality also earned him the nickname, “Broadway Joe” from fellow teammates.

Joe Namath switched teams in 1977 when he signed on with the Los Angeles Rams. This career did not last long, as he injured himself often and had knee problems.

In 1969, while he was still playing football, Joe Namath got his own TV show, The Joe Namath Show. On the show, he worked with Dick Schaap. The show was a talk show that discussed various sports programs. It only lasted for one season. However, he did work on other sports television shows, including The Competitive Edge. He also performed in guest roles in television shows like Married with Children and The John Larroquette Show.

Joe Namath owned a bar called Bachelors III for a short time. However, the NFL thought the bar was bad for his image and asked him to distance himself from it.

After retiring from football, Joe Namath went back to college (again at the University of Alabama) to earn his bachelor’s degree.

Joe Namath was inducted into the Football Hall of Fame in 1985.

Joe Namath struggled with alcoholism for much of his life. He spent much of his time in bars, and he even had several bars of his own. He worked to get over his addiction and wrote a book about his struggles with alcohol titled Namath in the early 2000’s.

Joe Namath married Deborah Lynn Mays in 1984. Together, the couple had two daughters, Jessica and Olivia. The couple ended their marriage in 2000.