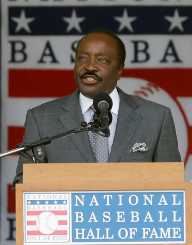 Joe Morgan was born in Bonham, Texas on the 19 September 1943 to Ollie and Leonard Morgan. He had five siblings. When he was five years old, the family moved to Oakland, California. Morgan showed an interest in ball games from a young age, continuously playing basketball, football and baseball.

He played baseball for the first time at age thirteen and became a star of the Castlemont High School team, but did not draw the attention of pro scouts because of his small size.

His was educated at Castlemont High School where Morgan played baseball. Later, he enrolled at Oakland City College. Around this time he was noticed for his natural ability, and in 1962 he was signed with the Houston Colt.45s.

After signing with the Houston Colt.45s, Morgan quickly made a name for himself as an exciting new baseball talent. He drew attention to himself when he became played for Houston Astros in 1965. He was a runner-up for the Rookie of the Year Award.

Joe Morgan was traded from Houston Astros to the Cincinnati Reds in November 1971. The Reds reached the World Series, in part because of his inclusion in the team. In 1972, he led the walks, runs and on-base percentage. In 1973, Morgan again played well and wished 26 home runs; he won the Gold Glove Award. In 1975, Morgan and his team beat the Boston Red Sox after Morgan had hit winning hits in Games 3 and 7 of the World Series. His career highs were impressive with a personal average of 327; 132 walks and 466 on-base percentage. By 1976, Morgan was at his peak, and the Cincinnati Reds were at the top of their form, ending the season with a four-game win over the New York Yankees of the World series.

Morgan spent 1980 back with Houston, then two years with the San Francisco Giants. His final team was with the Philadelphia Phillies in 1983. He left the game with 1,865 walks, the third highest in Major League history.

Joe Morgan was inducted into the Baseball Hall of Fame in 1990. In his publication The New James Historical Baseball Abstract, Bill James listed Morgan as the best second baseman of all time. He was presented with the National League MVP Award in 1975 and 1976. Morgan won the Gold Glove Award five times in a row (1973-1977), In 1982, he won the BL Comeback Player of the Year award.

Morgan’s first wife was Gloria, and they had a daughter Angela before divorcing. He then married Theresa in 1990, and they had three children: Lisa, Ashley, and Kelly.

When his playing days were over, Morgan was sought after as a broadcaster. In 1985, he was a broadcaster for the Reds and then he was with the Giants for nine seasons. He appeared on ESPN’s Sunday Night Baseball for many years and also called games for ABC.

In 1990, Morgan was inducted into the Baseball Hall of Fame. In 1993, he published an autobiography entitled Joe Morgan: A Life in Baseball.

The leading charity Morgan has contributed to is Adventures in Movement which assists disabled children. He has been involved in numerous other charitable organizations.

In 1988, Joe Morgan was arrested by two undercover police offices at LA International Airport. He was accused of being a drug dealer. After the police had realized that they had the wrong man, they let him got. Morgan accused the police of rough handling. In 1993, the LA City Council settled with a three quarter million dollar payment.