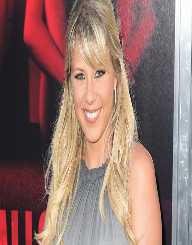 Jodie Lee-Ann Sweetin is an American actress, dancer, television personality who fell for drugs because she felt “bored.” Born on January 19, 1982, she is best known for playing the role of Stephanie Tanner in the sitcom Full House and the sequel Fuller House. Her other films include Brotherly Love, Party of Five, Hollywood Daring and Finding Santa among others. Just after Full House, Jodie Sweetin became addicted to alcohol, cracks, ecstasy, and methamphetamine.

Jodie Sweetin was born on January 19, 1982, in Los Angeles, California. When she was nine months old, her uncle, Sam Sweetin, and his wife, Janice adopted her since both her parents were serving prison terms. Since his biological father was not purely a native of America, the adoption process was not formalized until she was two year. Growing up, she showed traits of acting, hence, went into acting at a very young age.

Jodie Sweetin never talked about her adoption publicly to prevent people from thinking that she forcefully went into acting. She attended the Los Alamitos High School with actor and dancer, Matthew Morrison. The two performed in musical theatre together, while in school. She graduated in 1999 and continued at the Chapman University in Orange, California.

Jodie Sweetin started as a child actor. At the age of four, she was doing television commercials. In 1987, she made an acting debut playing the role of Pamela in the sitcom, Valerie. That same year, she played the role of Stephanie Tanner in Full, a role she will play until 1995 when the show ended.

Her role in Full House remains the best role in her entire career. Jodie Sweetin also starred in Brotherly Love, 1996, as Lydia Lump, Party of Five, 1999 as Rhiannon Marcus and Yes, Dear, 2003 as Maryanne. After graduating from the university, she became the host of the season two of the Fuse show, Pants-Off Dance-Off.

She continued her acting career by starring in Small Bits of Happiness in 2008. It was about a suicide prevention specialist. The film won Best Comedy award at the 3rd Annual Independent Television Festival, in Los Angeles. Jodie Sweetin appeared in Port City and Redefining Love in 2009. He next role was in the internet show, Can’t Get Arrested in 2011.

Jodie Sweetin played the role of Leia in the television film Single Out in 2012. He reprised her role as Stephanie Tanner in the Netflix sequel Fuller House. Her most recent role is in Hollywood Darlings in 2017.

Jodie Sweetin competed as one of the celebrities in season 22 of Dancing with the Stars. Dancer, Keo Motsepe, was her professional partner. The couple finished at the sixth place as they were eliminated on week eight.

Jodie Sweetin has married four times, first to Shaun Holguin, a Los Angeles Police officer. They married in 2002 when Sweetin was 20 years and divorced in 2006. One year after the divorce, Sweetin dated Cody Herpin, a film transportation coordinator, whom she met through friends. They married on July 14, 2007, in Las Vegas, Nevada. The couple has a daughter, Zoie. Sweetin filed for divorce from Herpin on November 19, 2008. Her request was granted on April 20, 2010. She was ordered by the court to pay Herpin $600 in child support each month.

She was also to pay $10,000 to Herpin in retrospective support. That same year, it was announced that she was expecting a child with her boyfriend, Morty Coyle. The two had been dating for about one year. They had a daughter, Beatrice. On March 15, 2012, they married in Beverly Hills after being engaged in January 2011. Once again, Jodie Sweetin filed for a separation in 2013 and finally divorced in September 2016. Her last known marriage was to Justin Hodak, a recovering drug addict. They were engaged on January 22, 2016, and separated on March 24, 2017.

Jodie Sweetin fell for drugs at a very young age. At the age of 14, she was already into alcohol. She later went into hard drugs using cracks, ecstasy, and methamphetamine. Her basic reason for taking solace in drugs was the feeling of boredom. In her memoir, “unSweetined” she discusses how drug addiction right after Full House.

She talks about how well she has improved in getting sober after going to rehab. According to the memoir, she finally got clean and sober in December 2008. She has since been working as a clinical logistics coordinator at a rehab center in Los Angeles. Jodie Sweetin currently holds a degree to practice as a drug and alcohol counselor.